“In many ways, for wine, Chile is like a mirror image of California,” said Byron Kosuge as we strolled from the winery to view the vast expanse of Kingston Family Vineyards in Casablanca Valley. Byron has been consulting winemaker for Kingston Family since 2003. He spends part of each year in Chile and the rest in Northern California where he consults for other labels and produces his well-regarded eponymous label B. Kosuge Wines. 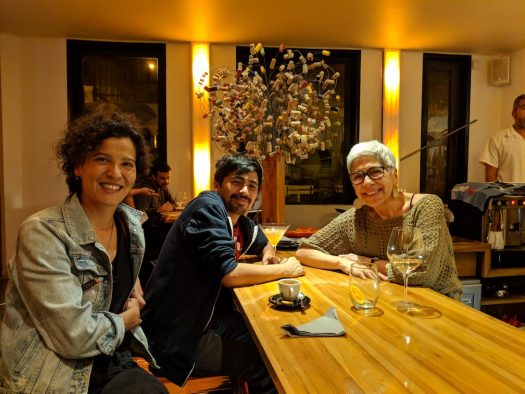 His comparisons to California stem from Casablanca’s proximity to the Pacific Ocean, which provides a recurrent marine layer that protects and nurtures the fruit in an otherwise hot and dry climate, the valley’s mineral rich soils and the temperatures ranging from roughly 45 to 85 degrees Fahrenheit—warm days, cool nights.

I was lucky enough to get an insider’s recommendations about which other Casablanca wineries to visit on my trip, and all the wines I tasted were very well made. The following four producers, distinct in character and vision from each other, all produce beautiful expressions of the land they’ve planted. And the land in Casablanca! The mountain ranges are massive and never-ending, mountains behind mountains behind mountains. They’re rocky and full of cactus, dotted with trees and terraced with grapevines. As you exit from a long tunnel (if you’re driving from Santiago), Casablanca Valley appears as an oasis of green vines, every row dreamlike and enticing.

Pro tip: Go to Valparaíso for lunch or dinner and enjoy the punk rock lux of the city by the sea and the delicious food and drink at Espiritu Santo. You can also stay there. You won’t regret it. 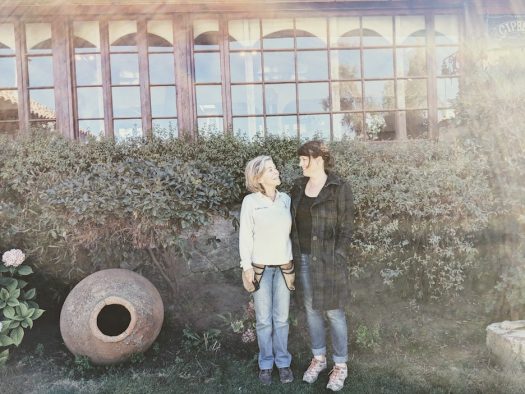 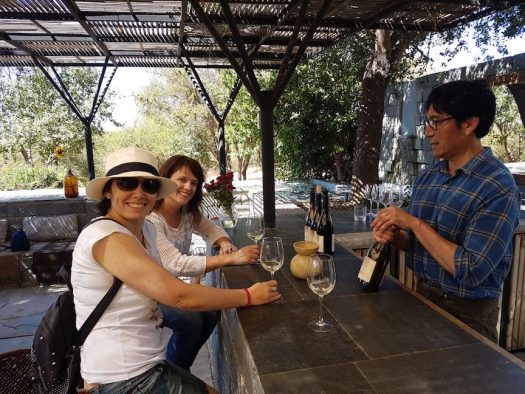 Owner/Winemaker María Luz Marin is like a triple shot of fine whiskey, petite with an impressive punch. The Viña Casa Marin property is 4km from the ocean just Southwest from Casablanca in the San Antonio Valley. Before planting there in 2000, the common wisdom was that land that close to the water was entirely inhospitable for wine grapes. She stuck to her guns though, and is now producing spectacular, cool climate wines.

I was particularly drawn to the whites: Sauvignon Blanc, Sauvignon Gris, Riesling and Gewürztraminer. However, the 2011 Casa Marin Pinot Noir also made me do a happy dance. The 2016 Gewürztraminer had an uncommon, wonderfully nutty funk on the nose and was deliciously dry. One of her sons, Felipe Marin, is her co-winemaker and also produces his own label from the estate called Viñedos Lo Abarca. His 2015 Sauvignon Blanc was so unusual to me, and very enjoyable over the course of three days. Less than 300 cases produced, the wine showed wet stone and asparagus on the nose, minerality with a hint of tropical fruits and dried plantains on the palate, and a lingering citrus, lemon peel finish.

Like so many small wineries, Viña Casa Marin is a family affair. Maria’s eldest son Nicolas Marin is Operations Director of the company and runs their scenic estate restaurant Cipreses Vino Bar. If the plate of salami, cheeses, fruits and nuts, and baguette topped with avocado, red onion relish, white fish, and crème fraiche they were kind enough to whip up for me was any indication of what else is on offer, run don’t walk and have dinner there too. 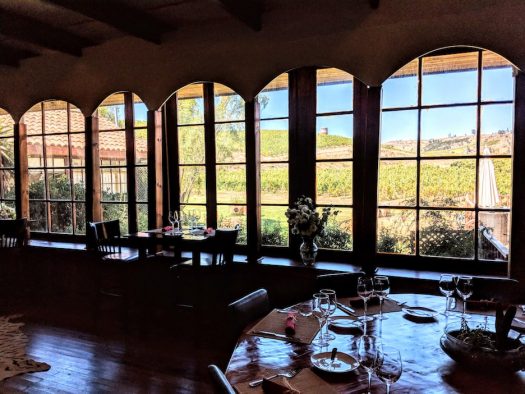 When I first drove through the gate at Kingston and headed up the dirt road lined with majestic palm trees, I took a wrong turn. I wound around the rows of vines into a pack of wild horses. It was a surprise! I found out later that the horses lived there, and weren’t supposed to be in the vineyards but sometimes sneak in to eat the grapes. The animals are so loved by the family that the wines are named after them

The first Kingston to come to Chile in the later 1800s was a Michigan mining prospector. He bought the land and, through several iterations, his farm is now the vineyards plus a stunning tourist property. They receive lots of visitors stopping in from Santiago en route to Patagonia, or the End of the Earth, and are building a house to host visitors overnight that will soon be ready. The multilingual family and staff are gracious, knowledgeable and ready to help with whatever travel information you may need. They also export and ship their wines from the U.S. so it’s easy to join their club, but I highly recommend a visit to the winery if you can swing it.

The wines are great, organically farmed and very reasonably priced. They currently produce Pinot Noir, Syrah, Sauvignon Blanc and Rose. As I mentioned, Northern CA winemaker Byron Kosuge consults, and Amael Orrego is the winemaker, a Chilean native whose family owns Cascada de Las Ánimas. On our tour, we started with their lovely Syrah-based Rose. While taking in the beauty all around us, we learned that Chilean vines are rare because they have native roots rather than imported rootstock.

The Kingston wines all had characteristics of a slightly warmer climate than Viña Casa Marin, more fruit-driven, but still fresh with a nice acid balance. My favorite was the 2013 Lucero Syrah, a savory bit of brooding blackberry that will perfectly complement your steak, bloody or otherwise. 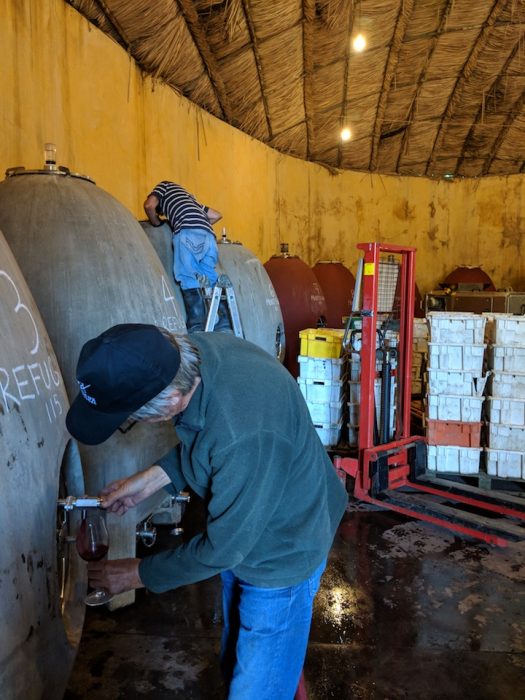 Julio Donoso showing us 2018 Refugio juice from its concrete egg

I had to get a ride from Byron to Montsecano because no easy directions were available. If they were, they’d have been in the nature of ‘once in Casablanca, turn right at the flowering bush, then hard left at the broken tree,’ etc. So we drove through a magical forest, up a mountain and landed at an industrial, thatched-roofed hut busy processing the final grapes of the 2018 harvest. Julio Donoso appeared out of the construction site for the new underground cellar, and swept us into a tour of the winery.

All fermentation for Montsecano and his other Pinot Noir label, Refugio, is done in either stainless steel or concrete eggs, with only concrete planned for future harvests because Julio prefers working with it. From tank and egg we tasted the juice of freshly picked Pinot for both labels, and a new Chardonnay project he’s working on. He was pleased with the rapid fermentation and the fine acid levels the 2018 harvest was producing. Many of the Pinots were surprisingly close to ready to drink.

Next we hopped in his car and survived a death-defying road trip to the top of the relatively small vineyard site. The inexpressibly beautiful 360 vista, a huge bird—that Julio called a white eagle—flying overhead, and the newly planted, fertile rows of vines along with some more mature blocks made me want to find a sleeping bag and stay right there for the night. These wines are sometimes hard to find, but I urge you to make the effort. The farming practices are all biodynamic and the whole operation just couldn’t be cooler. 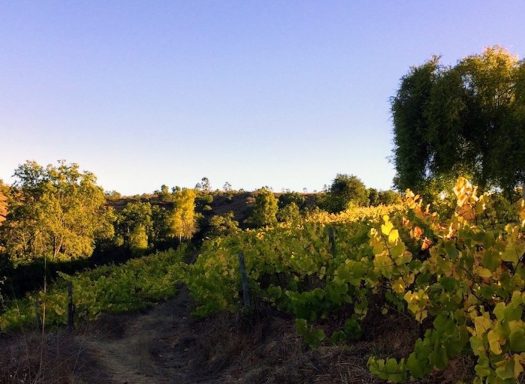 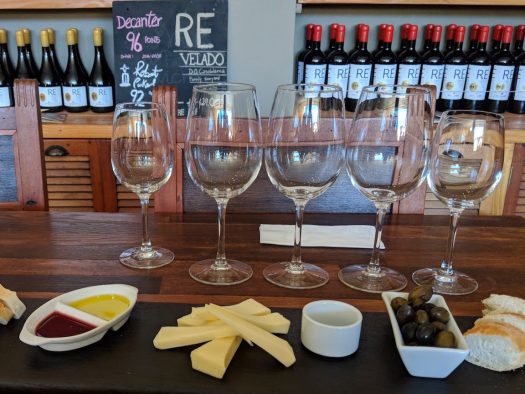 Bodegas Re tasting by appointment

The Re in Bodegas Re stands for reinvention, revive or rebirth. A second-generation project from a Concha Y Toro alumni winemaker, the Casablanca vineyard property is vast but most of the fruit is sold to other vintners. A small amount of fruit is chosen for the Bodegas Re brand to make intriguing blends with historical resonance and names that highlight rather than obscure the blending, like SyrahNoir, Cabergnan or Pinotel. (5 points if you can figure those out without looking at their website).

I enjoyed the Re 2014 SyrahNoir quite a bit, a blend of Syrah and Pinot Noir. It had the light on its feet character of many Pinots coupled with the meatiness and savory notes of Chilean Syrah, all well-balanced together. I also liked the Re 2010 Cabergnan, a blend of predominantly Cabernet Sauvignon and a small amount of Carignan that is still wildly fresh and could probably lay down for another ten years. It was most pleasurable to drink after being open for 24 hours. 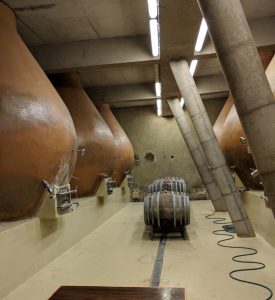 Bodegas Re amphora and oak barrels

Being a tourist at Bodegas Re is easy and fun. My guide spoke perfect English, although I assaulted her with my broken Spanish now and then. She took me through the vineyard, the old school Licor de Frutilla room filled with booze-soaked fruit in pretty bottles, and the winery where they use amphora-inspired clay vessels as well as neutral French and American oak to age their wines.

The tour culminated in a lovely wine tasting accompanied by bread, cheese and olives, and a superb olive oil that is also produced on the property. The tasting room is open daily from 10 to 6 P.M. and tours are scheduled by appointment. 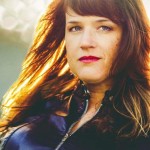