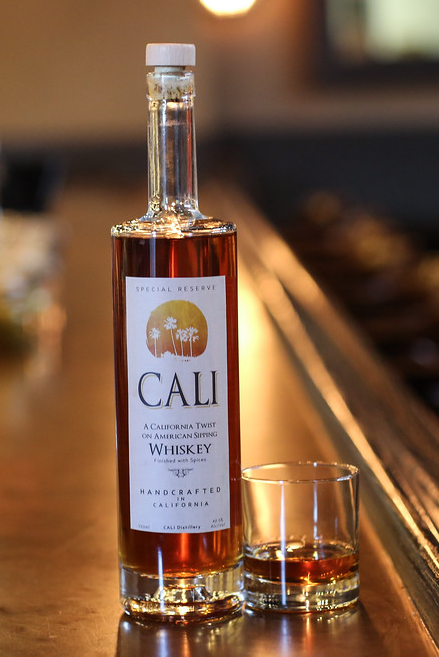 I’ll allow proprietor Howard Witkin, who runs the LA-based company with his wife Marni, to explain what Cali actually is:

Building on Marni’s knack for using high proof alcohol to capture the flavors and aromas of cool stuff, we started experimenting with using raw whiskey to pull oils and esters, flavors and aromas out of a combination of herbs, spices and botanicals. By the time we hit revision 85.31 we had designed our own mashbill for a high rye bourbon, and perfected our mix of botanicals and process of aging and infusing to get an incredibly delicious, luxurious sipping whiskey.

It isn’t a flavored whiskey, but it is a whiskey with unique and complex flavors derived naturally from the steeping and aging process. We had such wonderful feedback again from friends, neighbors and bars that we felt it was ready to share. The TTB classifies it as Whiskey finished with Spices. We call it a California Twist on American Sipping Whiskey.

Unfortunately we don’t have a category for California Twists on American Sipping Whiskey, so we’ll have to roll with it in the flavored whiskey category.

With all that said, here are some thoughts on this truly innovative and original spirit:

Immediately exotic, the nose has a chai tea essence, showcasing a melange of cinnamon, cloves, cardamom, and vanilla. The palate largely follows suit, letting the spices accent the moderately sweet whiskey, rather than vice versa. The vanilla is a touch stronger than on the nose, but all of the elements of the subcontinent spice bill make a sustained appearance here, too. The finish is drying but, as expected, lingers heavily on the spice elements, a charred clove character carrying on for some time. It’s really quite enjoyable on its own, but I can envision all kinds of cocktail opportunities coming out of this bottle.