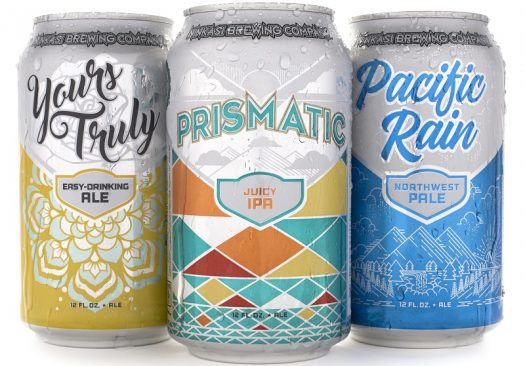 Eugene, Oregon-based brewery Ninkasi has a bit of a cult following, and it’s just dropped three new brews, all available in cans (its first canned beers) and on draft. We tried them all. Thoughts follow.

Ninkasi Brewing Co. Yours Truly Easy-Drinking Ale – With loads of malt, this brew is quite lager-like, with a doughy body that pairs interestingly with its notes of banana, rice pudding, and toasted bread. It’s a simple beach beer, as the name suggests, but charming enough for its place in the market. 4.3% abv. B

Ninkasi Brewing Co. Pacific Rain Northwest Pale – Sweeter and spicier than I expected, this interesting American pale ale offers notes of bright malt, golden raisins, and honeysuckle flowers. A crisp bite recalls coriander and black pepper, though the finish is all honey and nougat. 5.4% abv. B

Ninkasi Brewing Co. Prismatic Juicy IPA – Ninkasi gives the hazy IPA a try, and its expression is rather restrained, heavier with bitter hops than most and somewhat less “juicy” than its name might indicate. Notes of bitter orange, roasted almonds, and apricots make unexpected showings on the palate, with malt (a common theme) closing out the finish. 5.9% abv. B+