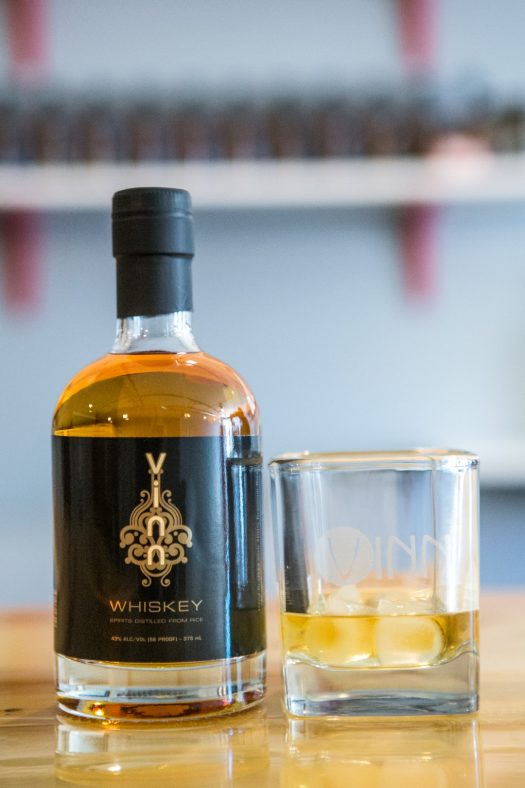 Vinn Distillery is a family-owned distiller based in Wilsonville, Oregon, where it makes all of its products from non-GMO rice. That includes vodka, whiskey, baijiu, and a blackberry liqueur. How far can a little rice go in today’s distillery universe? Let’s dig in to the full lineup.

Vinn Distillery Vodka – Reportedly the first rice vodka produced and bottled in the USA. The nose is heavy with musty grain notes, a surprise given the base of rice, but the palate shows more promise. Here, a bracing astringency finds balance in just the right amount of marshmallow sweetness and a little lemon. The finish is bright and fairly clean, with only a hint of that grainy note that mars the nose. 80 proof. B / $38 [BUY IT NOW FROM DRIZLY]

Vinn Distillery Baijiu – Punch up the cereal-meets-mushroom note in the vodka by a factor of 10 and you’ve got this baijiu, which is always a funk-fest in the making. The nose of a tire fire and musty attic don’t do many favors from the start, but the palate is mercifully lighter than that. Here it comes across more like a white whiskey, with a more lightly toasted cereal note that lingers for minutes. Notes of soy sauce and canned green beans give the finish, well, something unique. 80 proof. C- / $54

Vinn Distillery Whiskey – The first rice whiskey produced and bottled in the USA, aged in #4 charred miniature barrels (the first batch was held in mere one liter barrels; no telling about the current one). It’s on the young side, for sure, but surprising throughout, with a nose of spiced nuts and butterscotch, at play amidst notes of solvent, the whiskey showing its youth here the most stridently. The palate is a bit of a surprise, spicy and quite nutty, with a bold butterscotch sweetness that makes the spirit feel more mature than it otherwise might. In time, some of the more astringent notes burn off, leaving behind a surprisingly rounded and sophisticated finish. An impressive craft whiskey, particularly considering it’s made entirely from rice. 80 proof. B+ / $30 (375ml) [BUY IT NOW FROM DRIZLY]

Vinn Distillery Blackberry Liqueur – Finally, this liqueur is made from Vinn vodka, plus Oregon blackberries and cane sugar. It’s also brought down to a more typical abv for liqueurs. Sweet and fruity, there’s no real essence of whiskey here, as the blackberries and sugar do all the talking. The fruit isn’t particularly distinct as blackberry, as the syrupy sugar character really does most of the heavy lifting. That said, as a creme de mure cocktail ingredient goes, it’s a perfectly acceptable expression. 56 proof. B / $NA