2017 Two Angels High Valley Sauvignon Blanc – Initially quite tropical, with a surprising pineapple note, this sauvignon blanc quickly settles down to reveal a more mineral core, one which fades rapidly into a somewhat bitter, lackluster finish. Over time, some herbal notes develop on the nose, but the don’t readily complement the fruit in the game. B / $14

2015 Two Angels Red Hills Lake County Petite Sirah – A rather classic example of petite sirah, this is initially a powerhouse of dried berries that takes a slow fade into gamy notes of bacon and smoke, washing away the fruit that has come before. In the end, a tough and bitter element dominates, leaving behind an almost metallic taste on the tongue. B- / $15 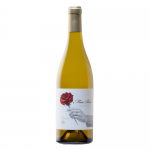