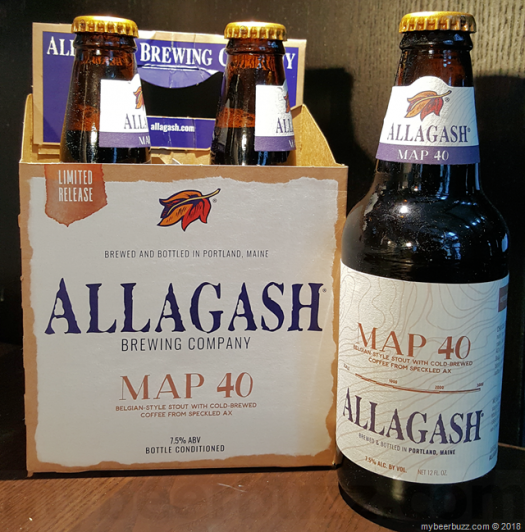 Portland, Maine is one of the most brewery-rich cities in the country, currently boasting 17 breweries despite a modest population of 66,000. One of the oldest and most respected of the city’s breweries is Allagash, which offers a range of excellent beers that are widely available nationwide.

Allagash’s newest, limited-release beer, Map 40, describes itself on the bottle as “a Belgian style stout with cold-brewed coffee from Speckled Ax.” Speckled Ax is a coffee shop opened by Matt Bolinder in Portland, Maine in 2012 that roasts its own coffee beans.

Sampling the beer, Map 40 lives up to the description, seamlessly blending some of the best characteristics of its two components. The beer appears virtually pitch black and offers a one-inch brown head that is slow to dissipate when poured aggressively into a glass. The nose offers bold notes of coffee, malt, and dark chocolate along with the slight sweetness common in Belgian style stouts. On the palate, Map 40 presents flavors that mirror the nose, with rich coffee and dark chocolate coming to the fore, followed by a bit of yeast and sweet raisin, and a light, enjoyable hop bitterness on the finish. The beer is not overly heavy, showing a medium body, which is surprising in light of its complex, assertive flavor. For those who like Belgian style stouts as well as those who like beers made with coffee, this is one to seek out.