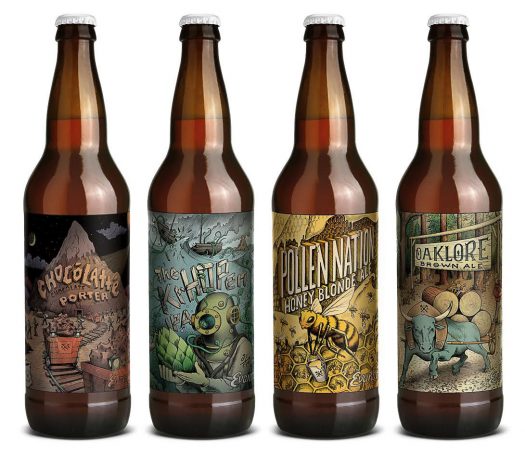 Irvine-based Evans Brewing Co. bills itself as “Orange County’s oldest craft brewer,” and by all accounts the company has seen impressive growth since its 1994 opening, especially in recent years. Recently the company sent us three of its brews (out of many) to check out, representing some of its most popular offerings. Let’s take a look at what the OGs from OC can brew!

Evans Brewing Co. Pollen Nation Honey Blonde Ale – A honey blonde ale sounds straightforward, but this was not at all what I was expecting. While an initial hit of honey and malt arrive as expected, the beer takes an almost immediate turn into sour territory, with a sharp, fruit-driven pungency, driven by notes of lemon juice and sour apple. There’s a possibility this is a bad bottle (I’ve never seen sour notes referenced with this beer before), in which case I’m happy to re-review. 5.2% abv. D+

Evans Brewing Co. Approachable Bastard Session IPA – Approachable, sure, but there’s not much there once you arrive. A straightforward hoppiness comes across as almost vegetal, with a muddiness that endures well into the finish. Toasty malt notes remain visible beneath the hops, but without any real nuance to them. 4.8% abv. C

Evans Brewing Co. The Krhopen IPA – A play on “the kraken,” this is another weird brew, positioned as a proto-IPA (with 73 IBUs), brewed with Nugget, Apollo, Cascade and Chinook hops — but it’s loaded up with unusual flavors, including (most notably) coffee, tangerine, and lemongrass. Beyond that, it’s a pretty straightforward experience, finishing on a hefty hop top note with hints of mushroom and some spice. 6% abv. B