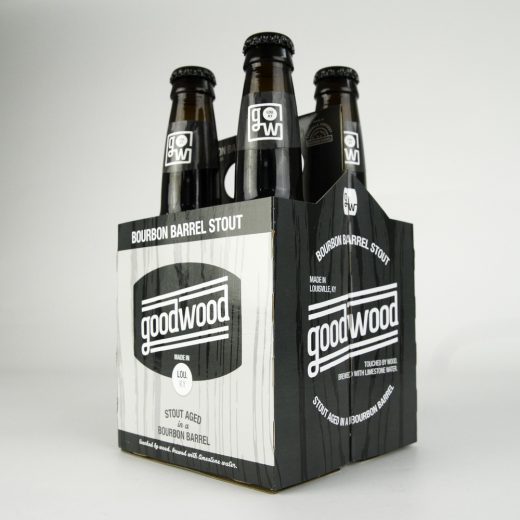 Goodwood Brewing Company in Louisville, Kentucky distinguishes itself from most other craft breweries by wood-aging every beer in its portfolio. According to their website, this is done as “an homage to this region’s distilling legacy and to those old barrels out there that still have so much flavor left to give.” With some of the country’s best bourbon distilleries at their doorstep, Goodwood probably has access to some of the more sought-after used barrels. With this in mind, we recently sampled Goodwood’s Bourbon Barrel Stout. Thoughts follow.

The nose on this beer is restrained, bordering on nonexistent. Often, bourbon barrel-aged beers have a sweet, boozy aroma, but with this stout you get almost no alcohol and only a hint of vanilla and burnt chocolate chip cookies. The body is surprisingly thin. On the palate, like the nose, you have to really go searching for the flavor. There’s toasted grain and some sawdust, but very little evidence of those more complex whiskey flavors, the vanillas and caramels that are the reason brewers bourbon barrel age their beer in the first place. Chief among its few redeeming features is a solid, bittersweet chocolate bite, but even that is unfortunately short-lived. The barrels used in Bourbon Barrel Stout may have come from some great distilleries, but they sure seem to be spent on flavor, making for a beer that is far from the homage to Kentucky distilling that Goodwood intends.