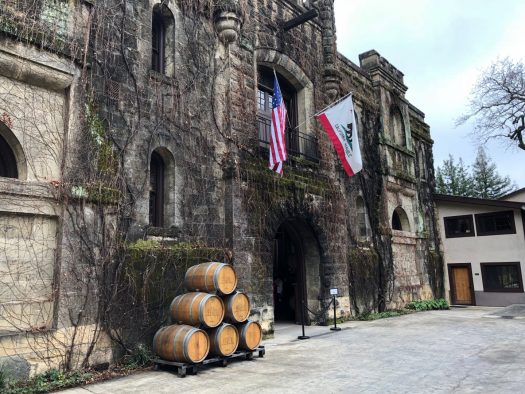 Chateau Montelena broke ground in 1972, and the winery has remained a stalwart of northern California wine country ever since. Best known for winning the white wine portion of the Judgment of Paris in 1976, today Montelena continues to churn out top-notch chardonnay and, more notably, cabernet sauvignon sourced from its Calistoga estate.

For no particular occasion that I could find, Montelena recently hosted a few dozen wine writers and industry types in its cellar, where longtime winemaker Bo Barrett and current winemaker Matt Crafton guided attendees through a once-in-a-lifetime “dream tasting,” a retrospective of Montelena’s cabernets spanning five decades, from the 1974 vintage (its first) to 2013. It’s hard to overestimate how unique and impressive this experience was, not only tasting the wines (all poured from magnums) but hearing Barrett’s tales of working in this industry for over 40 years.

My thoughts on all wines tasted follow, along with photos and other tidbits… 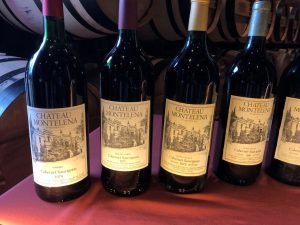 1974 Chateau Montelena Cabernet Sauvignon – “Basically a prototype,” Barrett explains, with sourced fruit from “available grapes,” likely from all over Sonoma. Definitely well aged, the wine is showing gamy notes and moderate oxidation, though the the color is still intact thanks to a quite present acidity. There’s a greenness to it, though the wine remains approachable and often enjoyable as a window into the past. B

1975 Chateau Montelena Cabernet Sauvignon North Coast – This wine was released after Montelena’s chardonnay had won the Judgment of Paris, right as the AVA system was beginning in California. With all eyes on Montelena, this wine — sourced from Rutherford grapes — has much more body than the 1974, but it’s still quite acidic, keeping things lively in the glass. There’s less going on here than the ’74, a relatively straightforward wine showing currant, plum, and a bit of blueberry. Definitely beginning to fade, but it still has some life in it. B+

1979 Chateau Montelena Estate Cabernet Sauvignon – The first estate wine in this tasting, 1979 was a tough year that experienced crop damage and a very early harvest. Barnyard and match head notes lead the way here, the wine a bit sulfurous on the nose. The palate is lightly balsamic, showing more opulence and a clearer wood influence, but otherwise a relatively indistinct character. B 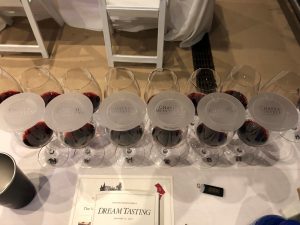 1980 Chateau Montelena Estate Cabernet Sauvignon – Showing more earth and leather here, with licorice notes and tobacco. Why the flavor shift? Because Montelena rotates its barrels through production, using them many times — up to five or more — until they are fully spent. Here we see some of those older barrels starting to influence the finished wine, giving it a spice element and some nutty almond notes. B+

1983 Chateau Montelena Estate Cabernet Sauvignon – Generally a maligned vintage in California, this wine is bold and rounded, with more alcohol and a stronger tannin level still hanging in there. Slightly chewy, with moderated fruit. B+

1988 Chateau Montelena Estate Cabernet Sauvignon – A heavy drought year, this wine is dense and intense, with lots of dark fruit, licorice, and dark chocolate. The currants are particularly dense here, but in classic Montelena style there’s plenty of acid to go around. ’88 is considered a weak vintage, but as of 2018 there’s a balance and lushness here that is showcasing a glorious wine. This is a gateway wine between the restrained wines of the 1980s and the somewhat bolder modern vintages, a wine that deftly and capably straddles two styles. A 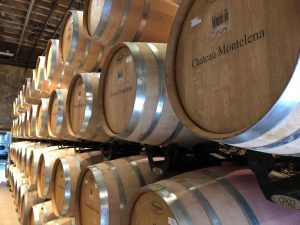 1996 Chateau Montelena Estate Cabernet Sauvignon – More perfume here, with lots of florals. Quite similar to the 1994, but slightly riper, with more bright fruit. So fresh it tastes like it could have been released two years ago, not 22. A

2001 Chateau Montelena Estate Cabernet Sauvignon – As we enter the zeroes, we see more wood and eucalyptus notes in this, a “wet” wine that’s juicy and berry-forward. Again, it’s quite fresh with no real indication of its age, its tannins softening beautifully. A- 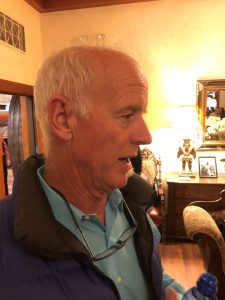 2007 Chateau Montelena Estate Cabernet Sauvignon – This wine received some of the industry’s highest accolades at the time, but today it’s not showing its greatest charms, with an overload of chocolate and plenty of tannin still holding on tight. Less acidic than many other Montelena vintages, it feels like it’s already on the decline. B+

2010 Chateau Montelena Estate Cabernet Sauvignon – A very cold year, here we get a flood of chocolate, vanilla, and big blackberry notes, though time is taking its toll here, now also showcasing a ton of earth that borders on vegetal. (prior notes here) B

2011 Chateau Montelena Estate Cabernet Sauvignon – Another tough and cold year for Montelena, this wine returns to some of those eucalyptus notes, with more incense, lavender, and heavy floral notes. These flavors aren’t as elegant as the similar ones found in the 1994/96 bottlings, but there’s an interesting spice and blueberry character on the finish here. A much better wine than its reputation claims. A-

2013 Chateau Montelena Estate Cabernet Sauvignon – Our final wine of the day, it remains young and developing, and needs time in bottle to mature. That said, its heavy herbal and eucalyptus notes create an enigmatic cedar box character. This is a wine with a future though it drinks a bit green today. B+

And some bonus tastes… 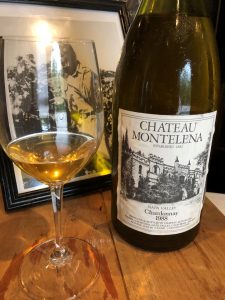 1988 Chateau Montelena Chardonnay – How does 30 year old chardonnay taste? Outstanding, it turns out. Fresh as a daisy, this wine feels a mere 3 to 4 years old, full of tropical notes, fig, melon, and a bitter lemon/quince kick that are all chardonnay standbys. The time in bottle gives this wine an austerity that comes across with a hint of almondy oxidation. This only adds depth and complexity to an already delightful wine. Gorgeous! A

2015 Chateau Montelena Chardonnay (pre-release) – Very tropical, with tons of pineapple and baking spice, layered with vanilla and cardamom notes. A-

2015 Chateau Montelena Estate Cabernet Sauvignon (pre-release) – This won’t hit shelves for more than a year, so I won’t offer a rating here. It’s already a quite expressive wine, very fruit-forward with a Beaujolais character at present. Clearly developing, it’s showing promise that we’ll revisit sometime in 2019.