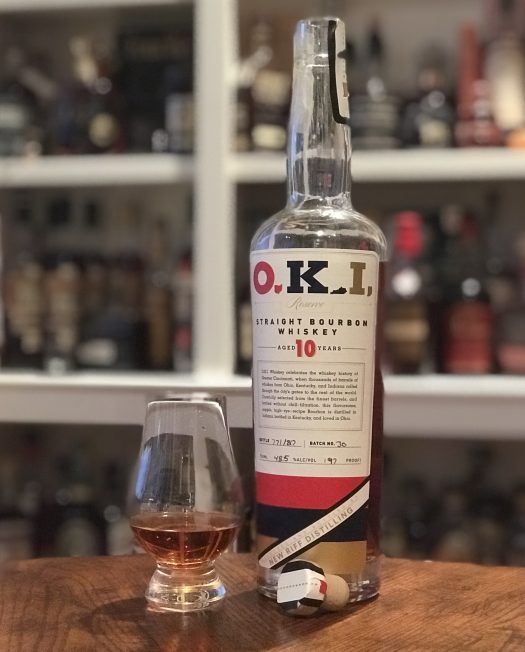 New Riff Distilling opened in 2014 in northern Kentucky, just across the Ohio River from Cincinnati. Like many new distilleries in recent years, it has been aging and bottling sourced whiskey from MGP to generate revenue while its own make comes of age. They’re honest about the source of this whiskey, which is thankfully a growing trend among craft distillers. So honest in fact, that it’s stated right on the label (once you break down the acronym). Their O.K.I. Reserve bourbon stands for “distilled in Indiana, bottled in Kentucky, and loved in Ohio.” While the Ohio bit is a little confusing (wouldn’t you want it loved everywhere?), they do claim to embrace the whiskey history of the Cincinnati area, which served way back when as a major port for the bourbon trade along the Ohio River.

New Riff purchased a large amount of MGP stock for the O.K.I. brand and has been releasing it in successively older batches. We recently got our hands on a bottle of 10-year-old O.K.I. Reserve. Thoughts follow.

This whiskey has an incredible nose. It’s immediately evident that this is high rye bourbon with the smell of clove and fruity rye spice atop mounds of butterscotch, oak, and tobacco. The nose prepares you for a bold, even perhaps “chewy,” bourbon, but it’s actually surprisingly light-bodied and somewhat restrained on the palate. It’s sweet, but not overly so, with good heat and balanced layers of traditional bourbon flavor. There’s vanilla bean and soft baking spice, a little cinnamon Red Hots note, and some subtle fruit notes: orange and apricot. It all wraps up with a medium-length finish that leaves just a hint of chocolate on the tongue.

If you’re a fan of the high-rye style MGP bourbon, O.K.I. Reserve is some of the better I’ve tasted, especially at its price point. Now for the bad news: New Riff doesn’t plan to release anymore O.K.I. beyond fall of 2018, when its own make bourbon and rye will hit the shelves, so grab a bottle while you can.