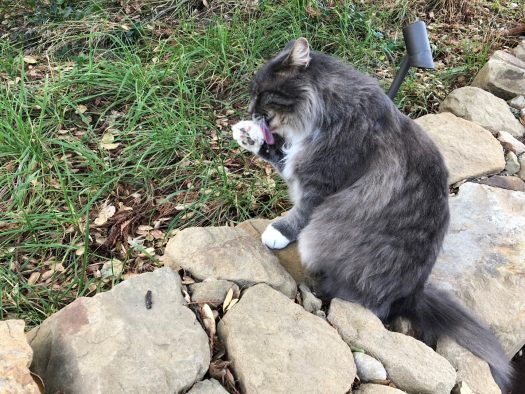 In 2014, the U.S. TTB finally approved a longstanding plan to split Paso Robles up into 11 AVAs. It was just the latest move that is turning this sleepy region into a top wine destination, with some 300 wineries (plus or minus, depending on who you talk to) cranking out some excellent bottlings. Rhone grapes — syrah, grenache, mourvedre, viognier — are the general focus here, but you’ll find just about everything being produced in this area, which experiences a wide range of microclimates but also undergoes huge swings in temperature.

Recently we spent four days in the region. Tasting notes on just about everything we encountered follow. 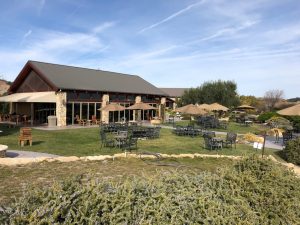 A perennial favorite in Paso, Calcareous is one of the first stops you’ll reach as you head into the mountains — and the source of one of the area’s best wines, too. Calcareous is a geological term describing calcium carbonate, which the soil here is so rich with that it’s white.

2015 Calcareous Estate Chardonnay – Bright and lemony, melon notes and some lightly tropical character. The moderately creamy body is spot on. A- / $34
2014 Calcareous York Mountain Pinot Noir – Burgundian in tone, with light smoke and leather notes, and a bit of a balsamic edge. Restrained cherry notes give it life. A- / $40
2015 Calcareous ZSM – 48% syrah, 28% zinfandel, 24% merlot. An odd blend, the zin giving the wine a sweet attack. The merlot dials it all back and gives it a touch of cocoa on the back end. B+ / $45
2014 Calcareous Estate Cabernet Sauvignon – Bright and fruity, with bold cherry, spice, and lingering cola and tea leaf notes. A- / $50
2015 Calcareous Grenache Paso Robles – A lightly floral nose is a surprise, as the wine winds its way toward dark raspberry, orange peel, and blackberry notes. A- / $49
2014 Calcareous Lloyd Paso Robles – 31% cabernet franc, 28% merlot, 24% cabernet sauvignon, and some other stuff I didn’t get written down. Chocolate, blackberry, and blueberry notes explode up front, leading to a bold, chewy palate with a citrus edge on the finish. A- / $62
2014 Calcareous Cabernet Sauvignon York Mountain Carver Vineyard – A quieter nose, chewy but stone-heavy, with balsamic notes and a silky finish. A- / $100
2013 Calcareous Signature Cabernet Sauvignon – Boldly minty with eucalyptus notes, brambly blackberry fills the palate. A- / $NA

A titan of Paso Robles and one of the founding wineries of this area, Tablas makes a huge selection of Rhone-specific blends and single-varietal wines. Play nice and maybe they’ll pull out some of the “VINsider” stock for you. 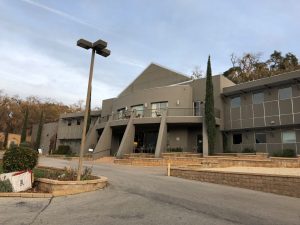 Since selling to Fiji Water in 2010, Justin Winery has undergone significant expansion and seen numerous upgrades. Today it’s a major destination in Paso Robles, complete with a luxury inn and gourmet restaurant.

2016 Justin Sauvignon Blanc Central Coast – Fueled by grapefruit, lemon, and some lime, this sauv blanc is bold, with a slight creaminess. A- / $NA
2016 Justin Viognier Paso Robles – A classic, peach-heavy wine with a mix of fresh herbs hitting on the back end. Some marshmallow notes emerge midway, but the finish is quite dry. B+ / $NA
2015 Justin Trilateral – A syrah, grenache, mourvedre blend (in that order), made in the style of a Cotes du Rhone. Heavily meaty on the nose, with notes of beef jerky and a leathery finish with notes of dried cherries. B / $NA
2015 Justin Malbec Reserve Paso Robles – Chewy, with some pepper, fresh plum, mint, and a long finish, with hints of cocoa. A- / $NA
2015 Justin Justification Paso Robles – 52% cabernet franc, 48% merlot. In pre-release, bold chocolate notes, big tannins, but will soften in time. Lightly floral, with some caramel on the finish. A- / $NA
2014 Justin Isosceles – 73% cabernet sauvignon, 15% cabernet franc, 12% merlot. Fragrant and spicy on the nose, iconic currant notes, a bit of baked apple, and a slight lilac note. One to watch. A / $NA
2015 Justin Cabernet Sauvignon Reserve Paso Robles – Quite bold with milk chocolate and blackcurrant notes, a barnburner or a wine with a semi-sweet kick to it. B / $NA
2014 Justin Isosceles Reserve – The nose is quite spicy, and the palate is loaded with same. The body is mountainous with fruit and some floral notes, but this wine needs ample time for its disparate flavors to integrate. A- / $NA

And one from sister winery Landmark Vineyards, whose facility is located in Sonoma… 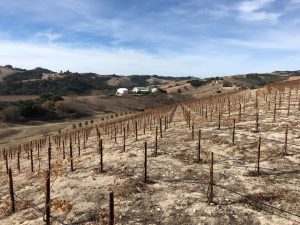 This high-end operation only produced its first vintage in 2010, and already it has built a reputation as one of Paso’s most luxurious wines — and most upscale places to visit, perched in a modernist castle atop a ridge studded with beautiful views. Nearly all of its wines are blends and all are made with estate fruit. 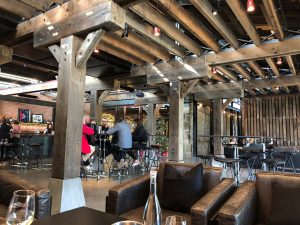 Located on the western edge of the Paso region, getting to Epoch requires some minor off-roading, but it’s worth the trip for Jordan Fiorentini’s lineup of rich wines. Don’t miss her “vinpressions,” Jordan’s drawings that visualize on paper her experience of tasting each wine. (Winery cat pictured above!) 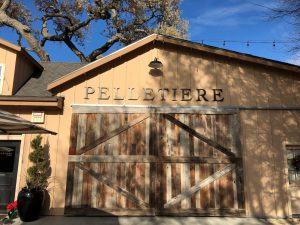 Janis Denner, a Bay Area transplant, purchased this dilapidated vineyard and winery in 2014 and built it back into something that is gaining some real attention for its focus on Italian grapes, unusual in this area. On the day of our visit, she was the only one working in the winery’s small tasting room. 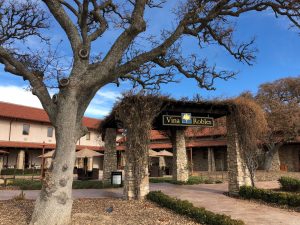 Vina Robles is one of only a handful of wineries on the “east side” of Paso Robles, across the 101 freeway. Flatter and drier, the wines here can be considerably different from those just a few miles away to the west. Vina Robles is also home to a large concert venue which hosts some of the biggest names in music and comedy to venture through this region. 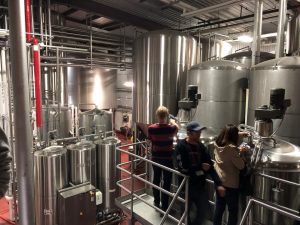 Paso Robles isn’t just home to some world-class wines, it’s also got a major beer operation calling the region home. Firestone Walker has become one of the biggest successes in craft brewing in recent years, driven largely by the runaway success of its ubiquitous 805 Blonde Ale. (This beer is sold in 30 states, but 80% of the total goes to California.) The tour here is quick, informative, and well worth taking. 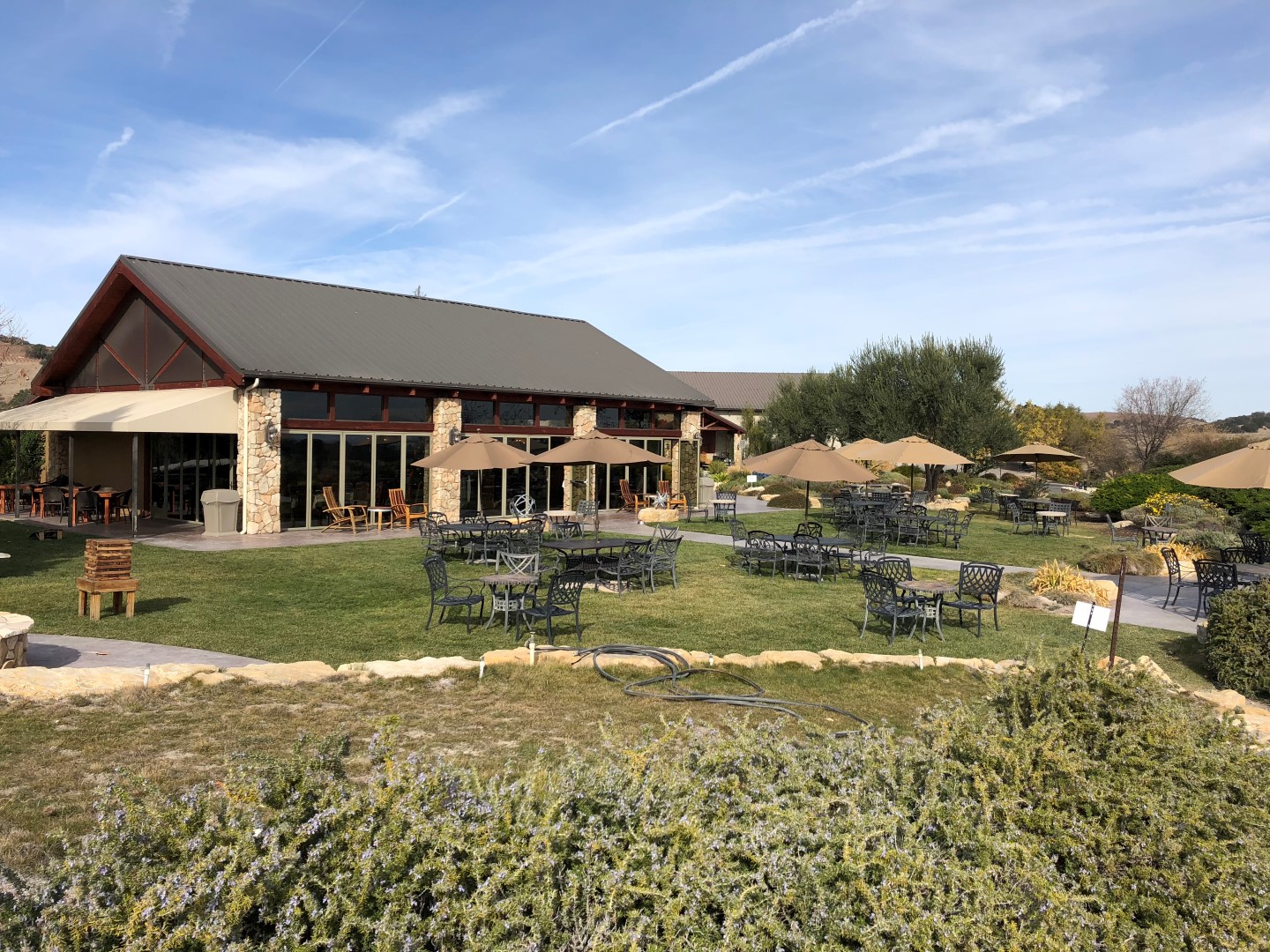 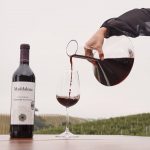