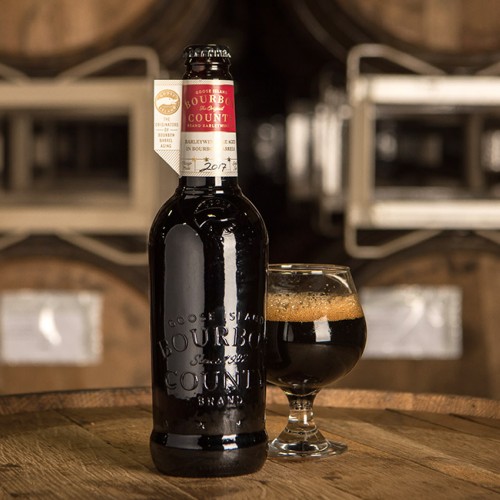 The beer-loving world breathed a sigh of relief with the quality of the 2016 Goose Island Bourbon County series after the lactic souring issues that plagued some of the 2015 releases. To make things even better, in 2017, the series officially expanded to six offerings: Original, Barleywine, Coffee, Proprietor’s, Northwoods, and Knob Creek Reserve. There were apparently plans for a seventh, Reserve Barleywine, but it was pulled at the last minute for quality issues. Goose Island is clearly playing it very safe with the quality of this series, as it should. It’s still a highly sought after release even as the number of barrel-aged beers on the shelves continues to increase.

Goose Island Bourbon County Brand Stout (2017) – The “Original” bourbon-barrel-aged stout in the Bourbon County series, this year’s release continues the tradition of infusing the brew with big, bourbon flavor. Just putting your nose to the glass, you’re hit with boozy vanilla and cream soda notes. While the body is rich and silky, there’s a little left to be desired in the flavor department. There’s more vanilla and a subtle dark chocolate note, but other than that it seems pretty one-dimensional. It’s still a delicious barrel-aged stout, but not as complex or interesting as previous years. 14.1% abv. B+ / $10 per 500ml bottle

Goose Island Bourbon County Brand Barleywine (2017) – While previous releases were reportedly aged in third-use barrels that had already held another stout, the 2017 Bourbon County Brand Barleywine release was aged in all second-use barrels from Heaven Hill. It’s no surprise then that there’s a stronger bourbon quality to this beer than in years’ past. Thankfully, the barrel notes don’t dominate and actually create some welcome complexity. The nose has much less alcohol than anticipated but still offers the expected vanilla and oak notes, complemented by a very subtle fruitiness. The palate is slightly bitter, offsetting some of the richness, with notes of cola, toffee, and a little brandied cherry on the finish. 14.4% abv. A- / $12 per 500ml bottle