William Hill experienced minor damage in last year’s NorCal wine country fires, but the winery described it is merely cosmetic. Nothing stopped the outfit from sending us its latest passel of releases, an iconically California chardonnay and a cabernet sauvignon.

2015 William Hill Chardonnay Benchland Series – A rich Cali chardonnay, though it’s dialed back on the oak and vanilla front, enough to let some lemon, tangerine, and nutmeg notes come through. Creamy, but scented just so with wintry spices, it’s a versatile wine with plenty of crowd appeal. B+ / $35

2014 William Hill Cabernet Sauvignon Napa Valley – Chocolaty, with currant notes, this is a rather standard expression of Napa cab, its bold body unfolding to reveal modest tannins, some sweetness, and a bit of spice. There’s nothing unusual in the mix here, but the mix of cocoa powder and dark red fruit works well enough for Sunday supper. B+ / $33 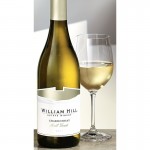