Mixers/Non-Alcoholic Rated A Rated B Rated B+ Reviews 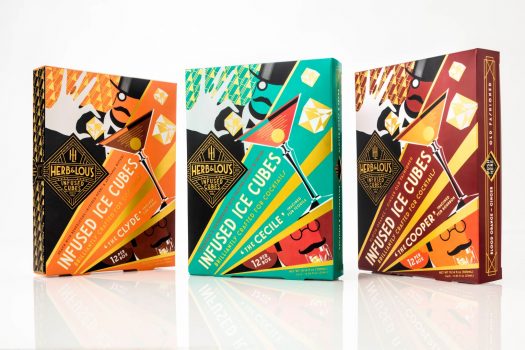 High-end bartenders have a neat trick available to them: Rather than chilling a drink with frozen water, they put stuff in the ice, freeze it, then let that flavor your drink as it melts. It’s also a nifty trick for home bartenders who don’t want to bother with a bunch of mixing and shaking: Just freeze up your mixers and drop the cubes in your glass as you need them.

Well, that sounds like a lot of work, too, so here’s a shortcut: Herb & Lou’s Infused Ice Cubes. While fairly self-explanatory, the gist is that Herb and Lou mix up fruit and botanicals and bitters and whatnot so all you have to do is take out a cube and drop it in your drink. Boom, cocktail’s done in 10 seconds flat. The cubes are packaged in slim cardboard boxes, with each cube nestled in its own foil-sealed plastic bin. You stow the whole box in the freezer and pop out a cube when needed.

They’re not cheap — each cube will run you over a buck — but a box of 12 will probably last until you’ve long since forgotten about it and decide to clean out your fridge.

We tried all three varieties on the market. Thoughts on each one follow.

Note: One cube is generally not going to be enough to chill your drink, so add extra (regular) ice in addition to the infusion if you’re serving on the rocks. The cubes themselves melt very quickly, and may not even stay solid in your freezer if it isn’t exceptionally cold.

Herb & Lou’s Infused Ice – The Cecile – A mix of watermelon, cucumber, clover honey, and thyme, designed for tequila (or vodka). It’s not the most attractive presentation, with a reddish sediment settling on the bottom of the cubes, but the impact with tequila isn’t bad. The honey is most noticeable, and the thyme gives the tequila a nice herbal lift. The cucumber doesn’t really translate well, probably because there’s not enough of it in a cube to make an impact, but the watermelon is more noticeable as the ice melts away, particularly on the finish. I’d drink this. B+

Herb & Lou’s Infused Ice – The Clyde – A purported spin on the cosmopolitan, with peaches, “Benedictine-inspired herbs,” and bitters. Doesn’t sound like any cosmo I’ve ever had, though I tried it with vodka as recommended (or try tequila, they company says). I didn’t get a lot of flavor from this, so I actually used two cubes in my glass (or you could just use less spirit). The results were appropriately peachy, with just a hint of aromatics. Nothing wrong with that, but there’s just not much to it. I’m thinking this might go over way better with Champagne. B

Herb & Lou’s Infused Ice – The Cooper – A “blood orange-ginger Old Fashioned,” designed for bourbon. Of the trio in the collection, this is the one that tastes the most like a real cocktail. The orange is vibrant and, at least when paired with Knob Creek, which I used, makes for a lovely complement. The ginger is more evident on the nose than the palate, but there’s a spiciness to the finish that showcases the ginger quality as well. This one changes considerably as the ice melts, the ginger getting increasingly hot as you go along. Definitely a winner. A