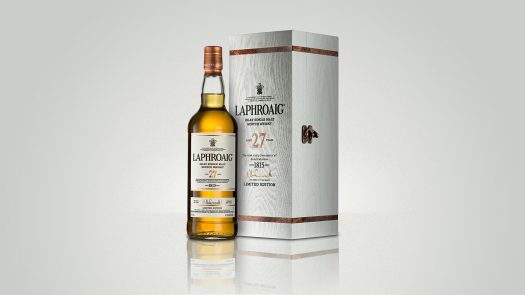 Laphroaig 25 Years Old is a watershed bottling from the Islay distillery — what then to make of the oddball Laphroaig 27 Years Old, which dropped as a complete surprise just a few weeks ago. 27 years vs. 25 years? Could the differences be that extreme? Let’s take a look at this brand new expression, a portion of which is aged in refill quarter casks and the rest first-fill bourbon barrels.

Surprise, surprise: The nose is immediately smokier than I expected, considering expressions like Laphroaig 25 tend to have mellowed out considerably at this point. Instead the iodine and peat notes really dominate the nose, leaving only a small amount of room for notes of lemongrass and a faint raspberry note. On the palate, the whisky is more calm and less smoke-fueled, offering notes of salted caramel, sugar cookies, and subtle fruit character that hints again at citrus.

While it’s a restrained and surprisingly less expressive version of Laphroaig, it’s nonetheless an enjoyable Islay treat — provided you have the scratch.