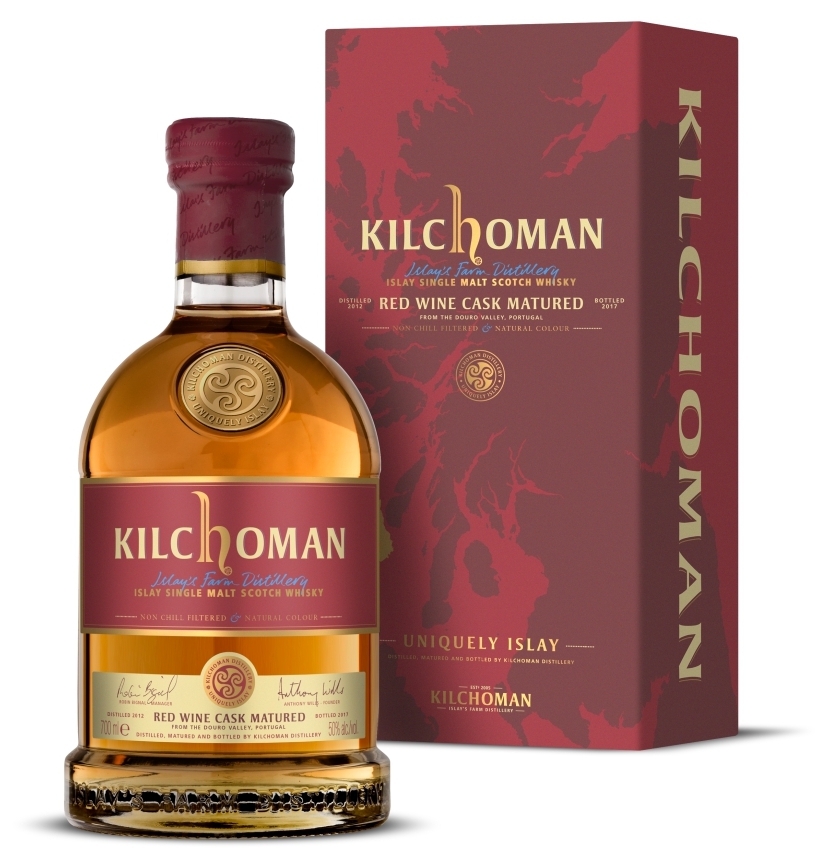 You can’t slow Kilchoman down, as the upstart Islay distillery is still cranking out at least four releases every year. Up next is a new vintage release, last seen in late 2015, and a brand new expression finished in red wine casks. Let’s dive in!

Kilchoman 2009 Vintage – This is an eight year old Kilchoman, one of the oldest bottlings the distillery has ever released. While the three prior vintage releases were aged exclusively in Buffalo Trace bourbon barrels, this one is sourced from a combination of Oloroso sherry butts distilled in 2008 and bourbon barrels distilled in both 2008 and 2009. Results: It’s very peaty, particularly for Kilchoman, The nose is dense with smokiness, both barbecue and open wood fires. Some of that trademark fruit — apples and bananas — manages to creep through, but it’s fleeting against the background of smoking peat. The palate is largely in line with the nose, a burly smoke bombforemost, though one with more of a fruit profile laced throughout it. Aside from the general lack of sherry influence, there are no big surprises on the smoky, fruity, and very lightly floral finish — in fact there are no big surprises in the whisky at all. This is classic Kilchoman,which means that despite some production tweaks, it’s not overly distinguished vs. prior releases. 92 proof. B / $100

Kilchoman Red Wine Cask Matured – This is a limited edition bottling aged entirely (not finished) in red wine casks from the Douro Valley in Portugal (though not, it would seem, Port casks). Distilled in 2012, making it roughly 5 years old. A ruddy burnt orange, almost pink at times, this expression immediately shows itself as something entirely different from the typical Kilchoman bottling. The nose is inviting, a combination of eucalyptus, cedar wood, dried fruits, and almost savory amaro notes. There’s smoke here, but it’s understated, a secondary character that stands behind the broader fruit and herb profile. The palate is just as enchanting, a rich and lively mix of red fruits, mint, vanilla, and a surprisingly vibrant chocolate character. The finish is sweet and sultry, with hints of red pepper jelly and echoes of dark chocolate. All told, it’s probably my favorite release of Kilchoman to date. An absolute must “buy it now.” (For kicks, compare this to Laphroaig Cairdeas Port Wood Edition 2013.) 100 proof. Under 10,000 bottles produced. A / $125