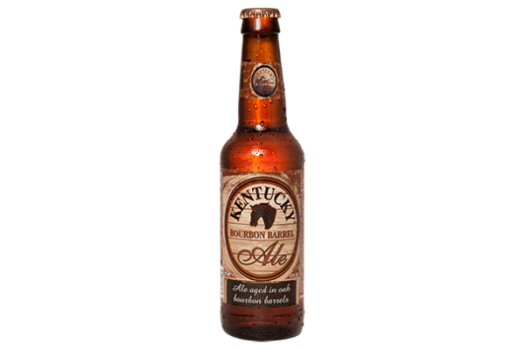 The gateway to whiskey obsession for fans like myself tends to be beer, usually craft beer. So it’s no wonder that breweries the world over are aging beers in whiskey barrels. While whiskey tends to best complement very dark beers, like stouts, there are a number of lighter barrel-aged beers on the market today. One of the easier to find brews in this category is Kentucky Bourbon Barrel Ale, produced by Alltech’s Lexington Brewing and Distilling Company in Lexington, Kentucky.

While the increase in barrel-aged beers has not coincidentally seen the demand for used bourbon barrels skyrocket, the folks at Lexington likely have their neighbors in the Bluegrass State keeping them in good supply. Their Kentucky Ale ale is aged for up to six weeks in freshly decanted bourbon barrels from unnamed Kentucky distilleries, and that bourbon influence is not at all subtle in this ale.

It pours with a light head and a golden amber color. The nose is all rich vanilla and oak, a predominance of aroma somewhat unusual even for barrel-aged beers. The approach is crisp and filled with caramel and toffee under a light, malty body. It’s immediately refreshing, which is unexpected given those big bourbon notes. Alltech has been making this beer since 2006, and my first sip of it years ago blew me away. The latest releases haven’t quite lived up to those first impressions, though. Despite the robust whiskey influence, it’s a little thin overall, and the flavor up front is sometimes fleeting.