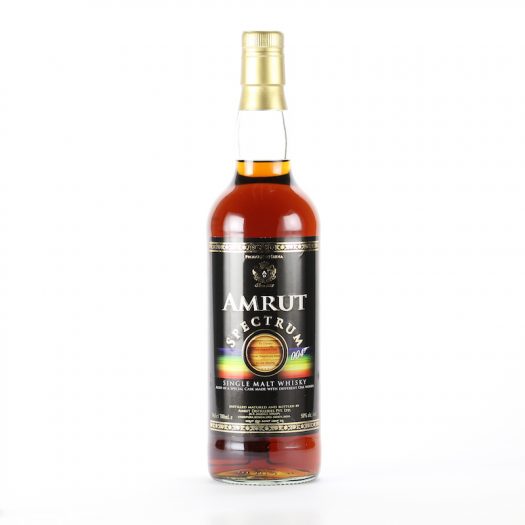 In 2004, Amrut Distilleries, based in Bangalore, India, introduced the first single malt whisky made in India to the UK market. Since then, the distillery has released several expressions of single malt all over the world using Indian barley, as well as peated barley sourced from Scotland. Amrut bottles their whisky at a comparatively younger age than most Scottish or Irish distilleries (only 4-5 years old), but that doesn’t mean it tastes young. Because the whisky is aged at 3,000 feet up in the tropical conditions of southern India, maturation occurs at roughly three times the Scottish rate, giving Amrut a significant advantage in the industry.

While the distillery offers traditional single malt expressions, both peated and non-peated and at standard proof or cask strength, they have also experimented with many different barrel finishes. Perhaps none of these experiments has been as complex or as interesting as Amrut’s Spectrum. The goal of this whisky was to achieve the effects of multiple barrel influences simultaneously by constructing casks from four different types of barrels: American oak (with a standard level 3 char), toasted French oak, and two sherry casks (Oloroso and Pedro Ximenez). Amrut then took their original single malt, aged three years in ex-bourbon casks, and transferred it to these Spectrum casks for an undisclosed amount of time. The first run of Spectrum in 2016 actually used an additional Spanish oak as well, but the 2017 release (dubbed 004) dropped it because it reportedly didn’t add that much to the final product. Whether the product of four different casks or five, Amrut Spectrum is an interesting experiment that I’m surprised we haven’t already seen from the industry leaders in Scotland. So what comes out of this Frankenstein barrel, you might ask?

On the nose, Amrut Spectrum is immediately bold and nuanced with notes of blackberry jam, clove, wet oak, and new shoe leather. It’s silky on the palate with a great balance of sweet and spice. It has a fantastic sherry backbone, with notes of black cherry, ripe prune, and a little campfire smoke, which you would expect with the Oloroso and PX influence, but this surprisingly doesn’t dominate the rest of the spirit. Several different oak tannins are apparent, but again, they’re expertly integrated. There’s also a great balance with the other barrel influences which impart a wide range of rich flavors: dark chocolate, hazelnut, cinnamon, and toffee, along with some citrus and overripe stone fruit. The finish is just long enough to keep you going back to the glass to coax out cracked black pepper underneath lingering coffee notes, plus a little menthol. I was excited to see how this whiskey might develop with a little water, but a few drops just dulled the initial complexity without adding much. This one is perfect at its original abv so sip it neat if you’re lucky enough to find a bottle.