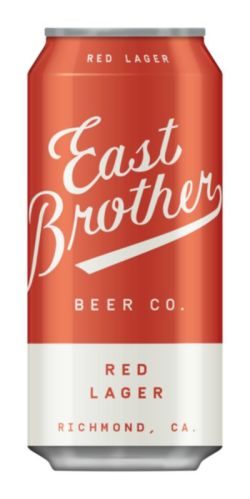 Richmond, California, is a rough-and-tumble suburb north of San Francisco, and it’s also the home of the new(ish) East Brother Beer Co., which was founded with the goal of creating “familiar, classic styles with precision and a modern sensibility.” No grapefruit IPAs here: East Brother uses traditional ingredients to put its own (modest) spins on the classics of brewing.

Reviews of four of East Brother’s beers — the Wheat IPA was unavailable — follow. Look for them in East Brother’s taproom, at your local Bay Area watering hole, or in 16 oz. cans.

East Brother Red Lager – A bit on the bitter side for a lager (this one a Vienna-style number), with a bit of an herbal element to it. The finish is quite dry — again, particularly so considering this is a lager, not an ale — with notes of rhubarb, roasted nuts, and sunflower seeds. 4.6% abv. B [BUY IT NOW FROM DRIZLY]

East Brother Oatmeal Stout – This is a brisk and quite solid rendition of oatmeal stout, mouth-filling but with enough carbonation to let the lighter elements — some berry fruit, a squeeze of citrus — shine past the core of roasted walnuts, dark chocolate, and coffee grounds. Surprisingly refreshing. 5.4% abv. A- [BUY IT NOW FROM DRIZLY]

East Brother Bo Pils – A lovely “Bohemian style” pilsner, it’s got ample malt, a pleasantly light bitterness, and layers of fruit on top of all of it — lemon, lime, and pineapple — plus just a hint of oregano. Incredibly drinkable, the toasty, bready backbone soothes the palate as well as the soul. 5.0% abv. A [BUY IT NOW FROM DRIZLY]

East Brother Red IPA – Another malt-forward brew, a clear departure from the typical IPA format, with nuttier elements up front, leading to a fruity, lively expressionality (not a word, but I can’t come up with anything better) on the palate. The finish sees some modest hoppiness — nothing any IPA fan will even shrug at — but ultimately the balance between malt and hops proves to be surprisingly deft. 6.8% abv. A- [BUY IT NOW FROM DRIZLY]

each $12 per four-pack of 16 oz cans / eastbrotherbeer.com 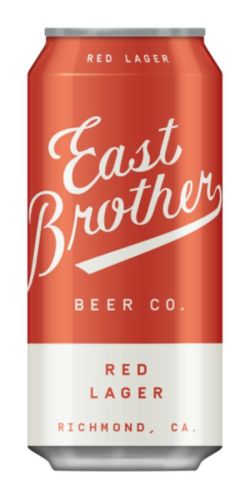