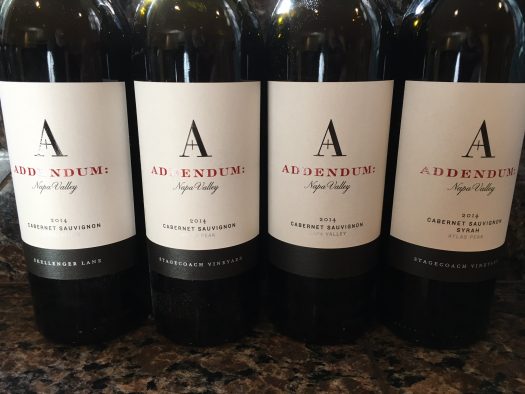 Addendum is a brand new (and standalone) wine label from the team at Fess Parker. The winemaking operation is in Santa Barbara, but unlike Parker’s main label bottlings, these grapes come from Napa up north. The goal of this unique project: To make high-end, Bordeaux varietal wines from California fruit… though you’ll find a little syrah in the mix in the last wine in this collection of four Cab-focused releases from this inaugural vintage, 2014. (The rest of the wines are all 100% cabernet.)

We recently tasted the wines along with Blair Fox, winemaker and Rhone varietal pro, and Tim Snider, the president of the winery. Thoughts on all wines tasted follow. (Note: Less than 800 combined cases were made across all four of these wines… and all are aged 28 months before bottling.)

2014 Addendum Cabernet Sauvignon Rutherford Skellenger Lane – For legal reasons, the actual vineyard can’t be named on this label, for legal reasons. Quite fruit forward at first, the lush blackberry and currant notes eventually give way to chocolate, vanilla, and some baking spice. Mint comes in on the back end, but  a moderately tannic backbone remains omnipresent through to the end. A classic Napa bottling that probably will really hit its stride in four or five years. A- / $95

2014 Addendum Cabernet Sauvignon Atlas Peak Stagecoach Vineyard – Even juicier and fruitier than the Skellenger Lane bottling, this wine avoids the overwhelming tannin that mountain fruit can bring, showing zippy raspberry and blackberry notes that eventually segue into some of the mint that the Skellenger Lane bottling also shows. The finish here is surprisingly acidic, but also opulent, with a silky and lush texture that lingers on the tongue. A- / $95

2014 Addendum Napa Valley Cabernet Sauvignon – Essentially a hybrid of the previous two wines — 2/3 from Rutherford, 1/3 from Stagecoach. Here the Skellenger chocolate absolutely attacks the nose, a modest milk/dark cocoa blend that guides the way to strawberries, blueberries, and plenty of currants. It just goes on and on… pivoting a bit on the finish to a touch of citrus. A real best of both worlds. A / $90

2014 Addendum Cabernet Sauvignon/Syrah Atlas Peak Stagecoach Vineyard – 56% cabernet, 44% syrah. An almost syrupy bomb of chocolate, vanilla, and butterscotch, layering in baking spice, caramel, and raisin notes. I’m reminded of whiskey when sipping on this wine, which is a good and a bad thing, but ultimately this showcase of fruit — which, by the way, is neither particularly heavy with either cab or syrah — tends to lean a bit too far to the sweet. B+ / $80 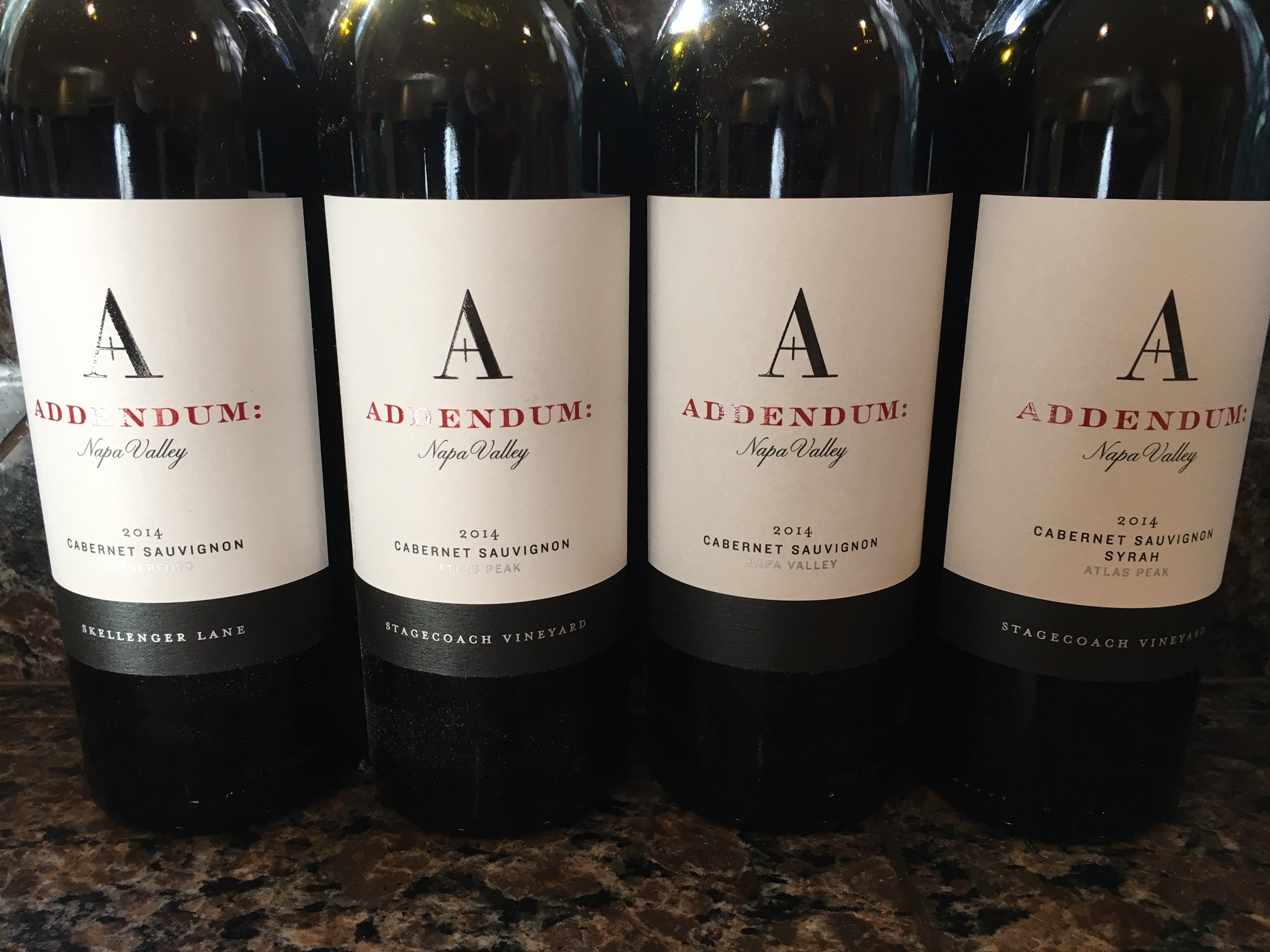