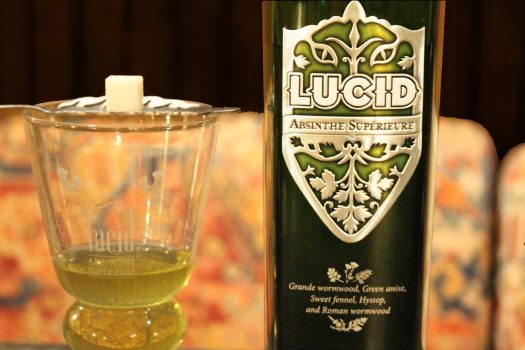 This April, we landed in Austin, Texas to see what bartenders in the region could do with absinthe — you know, outside of pouring it into a glass with sugar and water.

The results were dazzling. I’m still dreaming about some of the winning concoctions the contestants came up with, particularly Chris Morris’s inspired Sogni d’Oro, a beautiful blend of Lucid Absinthe, espresso liqueur, dark rum, pineapple juice, and coconut nectar.

Now Drinkhacker and Lucid are back for round two: We’re heading to Los Angeles this September to see what the mixologists of the Southland can serve up.

Consider the bar raised. We’ve already seen some impressive entries, and I know that the judges will be looking for something completely different. Will the winner go with a spin on tradition? Perhaps the ever-popular absinthe-laced tiki cocktail? Or something we’ve yet to even think about?

The rules are about the same as last time around: We’re accepting entries now through August 25. Finalists will be selected and announced on August 28. On September 11 we’ll have a live competition in Los Angeles (venue to be announced) where the finalists will make their drinks live for us, the judges, and you, the audience.

The judges will convene to pick a winner, who’ll receive a $1000 prize from Drinkhacker. The “fan favorite,” based on voting from attendees, will receive $500 in cash.

Ready to enter? The contest is open to working mixologists throughout Southern California, so don’t be shy if you’re working in Long Beach or La Jolla.

To enter, create a unique recipe using Lucid Absinthe and email the recipe and a photograph to [email protected] Again, entries will be accepted through August 25 at 11:59pm PDT. The field of entries will be narrowed to 10 finalists who will be announced on August 28.

Time to get cracking, kids! Watch this space (and follow @drinkhacker on Twitter) for more news as we get closer to the big event!