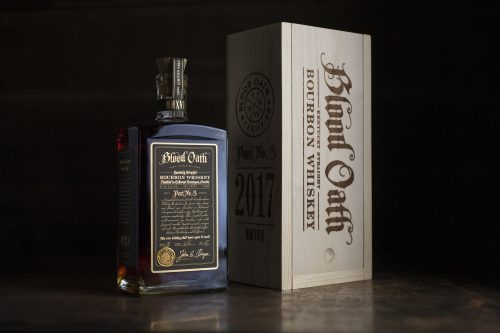 The third installment of Luxco’s annual Blood Oath series, Pact No. 3, was released in March of this year, and as with previous releases it’s a product of significant creativity. Like Pact No. 1 and Pact No. 2 before it, this release is a blend of three different rye-heavy bourbons ranging in age from seven to twelve years old.

Pact No. 3 is nothing if not rye-forward, with all of the component bourbons in the latest release having a high rye mashbill, although the exact rye content is not specified. Building on the success of last year’s blend, which included a Port-finished whiskey, one of the bourbons in Pact No. 3 is finished in cabernet sauvignon barrels. Wine cask finishing is still not common in the bourbon world, and the use of cabernet sauvignon casks is even rarer (only Jefferson’s Reserve Groth Reserve comes to mind). Luxco partnered with Swanson Vineyards in Napa Valley to procure the wine barrels for this release, and according to the creator of Blood Oath, John Rempe, the use of this particular type of wine cask allowed for the creation of “more character and depth” in the resulting bourbon.

I have to agree with Rempe. This whiskey packs character and depth aplenty. On the nose, Pact No. 3 shows notes of brown sugar, caramel, and stewed red fruit with just a slight mint quality underneath it all. The palate is rich and oily with oak, vanilla, tons of chewy caramel, and subtle dark chocolate. The rye spice only really arrives on the back end, but it adds a wonderful richness to the finish, which is long and warming with lingering black cherry and cinnamon notes.

Although Blood Oath remains a sourced product, Luxco’s new distillery in Bardstown, Lux Row Distillers, will soon begin producing and aging future releases for the line. If they make whiskey as well as they source and blend it, we all have a lot to look forward to.