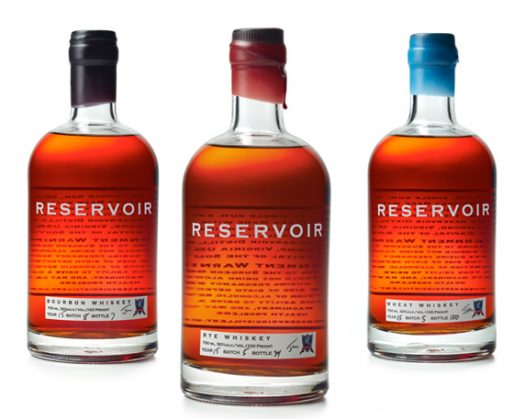 When deciding how to formulate their mashbills, Reservoir Distillery took one of the more unique approaches among craft whiskey-makers. They decided to not use a mashbill. Well, at least not a complicated one. Defying tradition, they concentrated on 100% grain expressions in their line up, all bottled at 100 proof. Their bourbon, for example, is 100% corn. Their rye is 100% rye. You get the idea.

Usually a flavoring grain is an important component, particularly in bourbon, but surprisingly Reservoir has managed to create a flavorful spirit out of just high quality, locally sourced grains and small, heavily charred barrels (no larger than 10 gallons and all with a #5 char). For those that would argue Reservoir’s approach to whiskey-making limits the potential complexity of their whiskey, distillery co-founder Dave Cuttino counters that their technique actually allows them to cater to the entire spectrum of whiskey drinkers by giving them the ingredients to make whatever “mashbill” they prefer (high rye, low rye, wheated, or even a wheated rye).

The potential for in-home blending aside, Reservoir Distillery’s whiskeys stand up just fine on their own. Thoughts follow. (Again, note all are 100 proof.)

Reservoir Bourbon Whiskey – Corn-sweet on the nose with notes of toasted cinnamon, pepper, and gingerbread. It’s bright on the palate and hot; caramel apple and candy corn notes evolve into sweet butter, maraschino cherry, and vanilla on the finish. Underneath the heat, there’s a lot to admire. A- / $45 (375ml) [BUY IT NOW FROM DRIZLY]

Reservoir Rye Whiskey – Clearly 100% rye on the nose here with citrus fruit notes all over it. The palate is spicy but not overpowering with layers of bubblegum, cracked black pepper, and some licorice. The finish is warming but a little short. B+ / $45 (375ml) [BUY IT NOW FROM DRIZLY]

Reservoir Wheat Whiskey – This may be the most “wheaty” of wheaters. There’s oak, fresh mint, and cinnamon red hots on the nose. The palate is soft despite the proof, with notes of honey, confectioners’ sugar, and vanilla. The finish is syrupy with some slightly grassy notes. B+ / $45 (375ml) [BUY IT NOW FROM DRIZLY]

Gray Ghost Whiskey – The Gray Ghost line is a limited release showcasing Reservoir Distillery’s own experiments with different blends. My sample had an effective mashbill of 75% corn, 20% rye, and 5% wheat. It was aged in eight 3-gallon barrels for 3 to 3.5 years, which is exceptionally long for such a small barrel. There’s a slight, but not unpleasant, warehouse funk on the nose, followed by honey and orange marmalade notes. The palate is initially hot and full of cloves, but it develops into a generous finish with cinnamon and toffee notes reminiscent of a much older whiskey. Reviewed: Year 17, Batch 2. A- / $90 (375ml)