New releases from Hahn and its upscale SLH line of wines, both made with grapes sourced from its estate in the Santa Lucia Highlands.

2015 Hahn SLH Pinot Noir Santa Lucia Highands – A thinner wine, particularly on the barely-there nose, but the initially watery body eventually builds to offer some bolder notes of licorice, charred wood, roasted meats, and savory spices. The finish is earthier and meatier than I’d like, but that does help it to pair better with a bolder meal than most pinot noirs. B / $20

2015 Hahn SLH Chardonnay Santa Lucia Highlands – Oak and butter on top of oak and butter, pumped up beyond imagination. Hahn can so often be a model of restraint, but for 2015 someone threw open the throttle and just let everything fly. Well, some mild lemon notes notwithstanding, the blowout of vanilla and brown butter simply destroy any hope of nuance. B- / $20 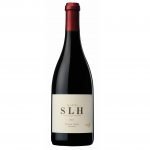