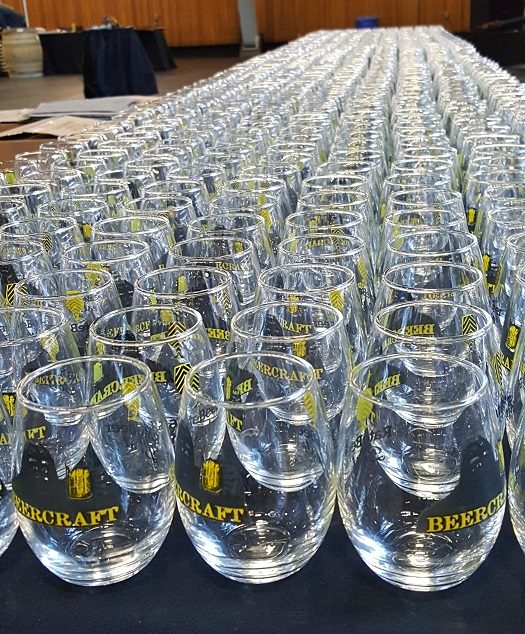 2017’s RateBeer Best Festival, benefiting Ales for Autism, recently arrived in Santa Rosa, California for the second year. Brewers from across the globe brought their brews here to compete in both beer and food competitions. Attendees were able to sample them all. 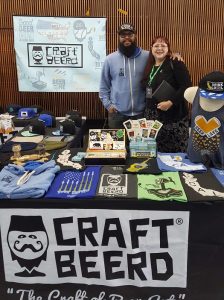 This year’s festival was double the size from the previous year, with the general admission line wrapping around the block. Once everyone was inside, it was shoulder to shoulder. Food vendors — some with beer based offerings — beer app providers, beer tour guides, drawings for beer related cruises, and beer related paraphernalia could be found among the many booths. We came away with a poster of original art used on a label, playing cards featuring the breweries in San Jose, a number of pins, and a really handy guide for rating beer.

Because so many breweries represented were already familiar to us (not to mention it would be a long article to cover all 42 breweries and their 169 brews), we decided to focus on a few brewers outside of the U.S.: Brazil, the UK, Belgium, Canada, and Japan. Some of these beers are retired, though specialty importers may still have some stock. 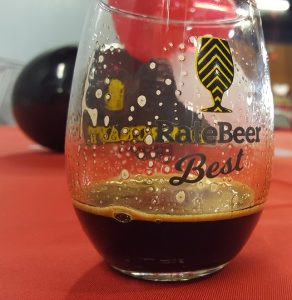 First up is Petroleum from Dum Cervejaria out of Brazil. True to its name, the oils from the coffee beans and cacao nibs give this a nice surface shine. This imperial stout has a very dark brown, nearly black body, with a head made up of large bubbles. At first the cocoa is prevalent in both aroma and palate, with a deep chocolate which enriches the beer throughout. Very strong, this is a sturdy beer to savor. 12% abv. B+

Seguin BA Biere Brut from Cloudwater Brew Co. is brewed in Manchester, England. These guys specialize in seasonal beers. Seguin BA Biere Brut is a 2016 light beer with a sunny yellow clarity and a light fizzy head. The champagne notes on the initial nosing are bright; the palate has a slight tang which intensifies for a moment. The brewer told us that’s from the champagne and saison yeasts, and that the beer is aged in white wine barrels. 6% abv. B

Yellow Belly Sundae from Buxton comes out of England as well. They also have a nice porter. From the immediate and recurring long lines, this was a favorite of attendees. It does indeed taste like an ice cream sundae in a glass. The chocolate body is topped with a caramel head and a sweet ice cream scent. Notes of peanut, vanilla, and chocolate come through nicely. Technically, Yellow Belly Sundae is a barrel aged stout, however, the stout steps back to allow the creamy sweet treat to shine through. 12% abv. A+

Ypris (2011) is from De Struise Brouwers in Belgium. This is a sour with a nice, inviting scent and a medium brown body. The sour immediately lightens to a nice tartness on the second sip. 30% of this beer is barrel aged with 70% new beer added. 8% abv. B+

Also from De Struise is Obetis Saison. This saison had a bright taste. The body was golden yellow; the head white and fizzy. It was our favorite of the two beers from this brewer. 8% abv. A


Another saison we tried came from Canada. Assemblage No. 7 is from Brassere Dunham in Quebec. This is also a barrel aged blend of saisons treated with brettanomyces, with a slightly cloudy light yellow body. The white head is bubbly. The hops are bright at first and linger through to the end. 6.6% abv. B

Perhaps the most interesting beer in both flavor and history is 3 Days from Japan’s Kuichi Brewery, which has been in business for over 190 years. This beer is called 3 Days because the initial brewing process was started just before the tsunami hit in March of 2011. They were unable to get back to it for three days, in which time a natural souring process had begun. 3 Days is a witbier made from all Japanese ingredients, including the hops. It is an amber ale with a nice, clear ruby body and a caramel frothy head. The hops are light and the maltiness not overdone. We found it very refreshing. 6% abv. A


If you’re interested in knowing the top 100 beers named the Best in the World at the 2017 RateBeer Best Festival, check out RateBeer here.

Kim Richards lives in Santa Rosa, California. She is an author, amateur cheese maker, wine/mead maker, and a novice home brewer. She enjoys a nice cocktail while listening to live music, watching movies and mixed martial arts, or dining at home and in restaurants. She and her husband frequent festivals and love to visit breweries and distilleries. Favorite cocktail: Old Fashioned with maple syrup.