A Visit to Jack Daniel’s Distillery 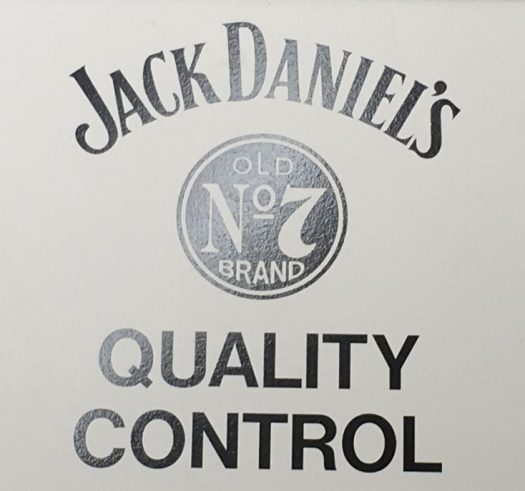 With sales of nearly 12 million cases per year, Jack Daniel’s is far and away the biggest whiskey brand in the world. No one else even comes remotely close. And if you spend any amount of time at the home of Old No. 7 in Lynchburg, Tennessee, you’ll be told in no uncertain terms who you can thank for that: Frank Sinatra, who discovered the brand in the 1960s and singlehandedly rescued it from obscurity. 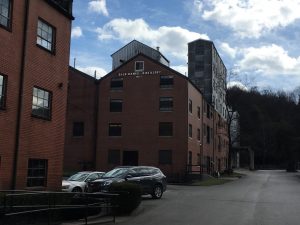 It’s easy to dismiss JD as a factory whiskey, a boring brand well past its prime that may as well be made by robots. But take a tour of Jack Daniel’s mammoth operation and you’ll see that Old Blue Eyes might have been on to something. While the distillery is huge and complex – with over 500 people working here – every facet of production remains under the control of the distillery or parent company Brown-Forman.

In a private tour given by Assistant Master Distiller Chris Fletcher, son of JD’s fifth Master Distiller Frank Bobo, we walked through every step of the process. The front end of that looks a lot like you’d see in any bourbon house: JD trucks in corn, rye, and barley (the proportions are 80/8/12, respectively), then puts it through one of 64 fermenters before it heads through the 40-foot-tall copper column stills for distillation. 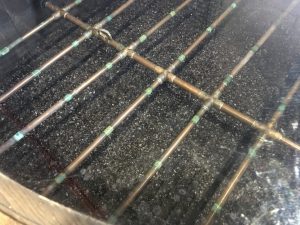 Before it hits the barrel, of course, the whiskey must be filtered through maple charcoal – part of the law that separates Tennessee whiskey from bourbon – in what is known as the Lincoln County Process. It’s important to note that this filtration happens before aging. Whiskey goes into the charcoal as white dog and it comes out as white dog, though it tastes completely different. (More on that later.)

Out back, stacks of maple staves, dried on site, are burnt to charcoal by trained firefighters. JD is proud of its charcoal filtering and boasts that bourbon is only used in one place: As a fire-starter to get those maple staves blazing. The coals go into one of 72 vats packed 10 feet high, into which the white whiskey is slowly dripped. It takes three days to make its way to the bottom, at a rate of less than 2 gallons per minute. When it does make it through, it is finally put into barrels and stored on site in one of Jack’s 88 warehouses. (All barrels come from Brown-Forman’s own cooperage, which also supplies Woodford Reserve and Old Forester; in a unique twist, these are well toasted before charring to an equivalent of a #4 char.) 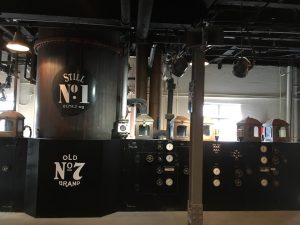 Old No. 7 has no age statement, but is typically 4 to 5 years old, as is Gentleman Jack. The Single Barrel releases tend to run toward 7 to 8 years of age. Also worth noting: All the water used for the mash and for proofing comes from the distillery’s on-site spring, which is why JD is located here, out in the middle of nowhere, about a 90-minute drive from Nashville. Jack doesn’t even leave its yeast or bacteria strains to chance. They are all cultured on site and delivered to each fermentation run as they’re needed.

Of course, every good distillery tour must end with a tasting, though up until a few years ago it was illegal to taste the whiskey they make here, until Tennessee changed the law regarding tastings in a dry county like Moore County. JD now has a swanky tasting area built into one of its small warehouses; we moved on to a private tasting in one of the offices to sample the bourbon line (leaving the flavored whiskeys to sample on another day).

A lot of these whiskies will surely be familiar to many of you, but it was nice to taste them comparatively and in the backyard in which they were made. Some thoughts follow (in the order tasted). 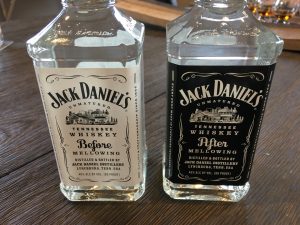 Jack Daniel’s Unmatured – Before Charcoal Mellowing – Here’s the white dog, straight off the still. Corn-heavy, slightly bitter… it could be any old white lightning. (Tasted at 80 proof.)

Jack Daniel’s Unmatured – After Charcoal Mellowing – Quite a different experience, as the grain notes are stripped down and replaced with floral elements and lots of fruit – banana and apple, especially. Eye-opening, and perhaps the clearest argument of why Tennessee whiskey ought to be classified separately from bourbon. (Tasted at 80 proof.)

Jack Daniel’s Gentleman Jack – Invented in 1988 to compete with the white spirits craze, Gentleman Jack is basically Old No. 7 that goes through 3 extra feet of charcoal filtration after it is aged. This results in a lighter (literally, it’s a much paler color) whiskey that shows more fruit while finishing clean. On that front, it succeeds, and the whiskey is an easy sipper that also mixes nicely. 80 proof. [BUY IT NOW FROM FROOTBAT]

Jack Daniel’s Single Barrel – The Single Barrel program began in 1997 to give connoisseurs a more fully-aged, higher proof version of JD. Old No. 7 dropped from 90 to 86 proof in the 1980s, and again to today’s 80 proof in 2002. (Imagine the outcry if that happened today!) If that didn’t get you there, well, JD could tell you to try Single Barrel. These are honey barrels from upper floors of the JD warehouses, and you can feel the lushness that comes with a few extra years of age. Bold and butterscotch-heavy, with big dessert-like sweetness, caramel, cloves, and ample barrel char, this is the way JD really ought to be consumed. 94 proof. [BUY IT NOW FROM FROOTBAT]

Jack Daniel’s Old No. 7 – It is tough to go from Single Barrel back to the mainline product, as it pales in comparison to the Single Barrel. Here it comes across as a bit thin, green with vegetal notes, 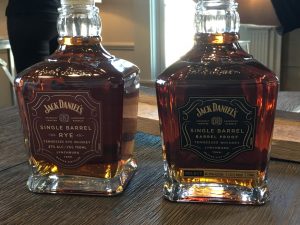 and more barrel forward, though cloves do hit the nostrils, and are evident on the finish. 80 proof. [BUY IT NOW FROM FROOTBAT]

Jack Daniel’s Rye Single Barrel – JD’s rye program has been years in the making, and its single barrel offering is now for sale in limited quantities. A batched, standard-edition release is likely to finally hit the market later this year. It’s got a bit of a medicinal note, with black pepper and dill following, while the finish picks up the pace with toffee and spice character. This is drinking quite well today and merits sampling. 94 proof. 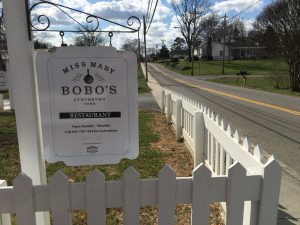 menthol, more visible caramel corn notes, dense and dark spices. Let it linger in the glass and more of that butterscotch makes it to the fore. 132.5 proof (bottles vary widely). [BUY IT NOW FROM FROOTBAT]

Of course, no visit to Lynchburg would be complete without a proper southern lunch at Miss Mary Bobo’s Boarding House, which is just up the road and which has served this community since 1913. Served family style and hosted by one of Lynchburg’s locals, it’s the only way to complete a long day of touring and tasting. 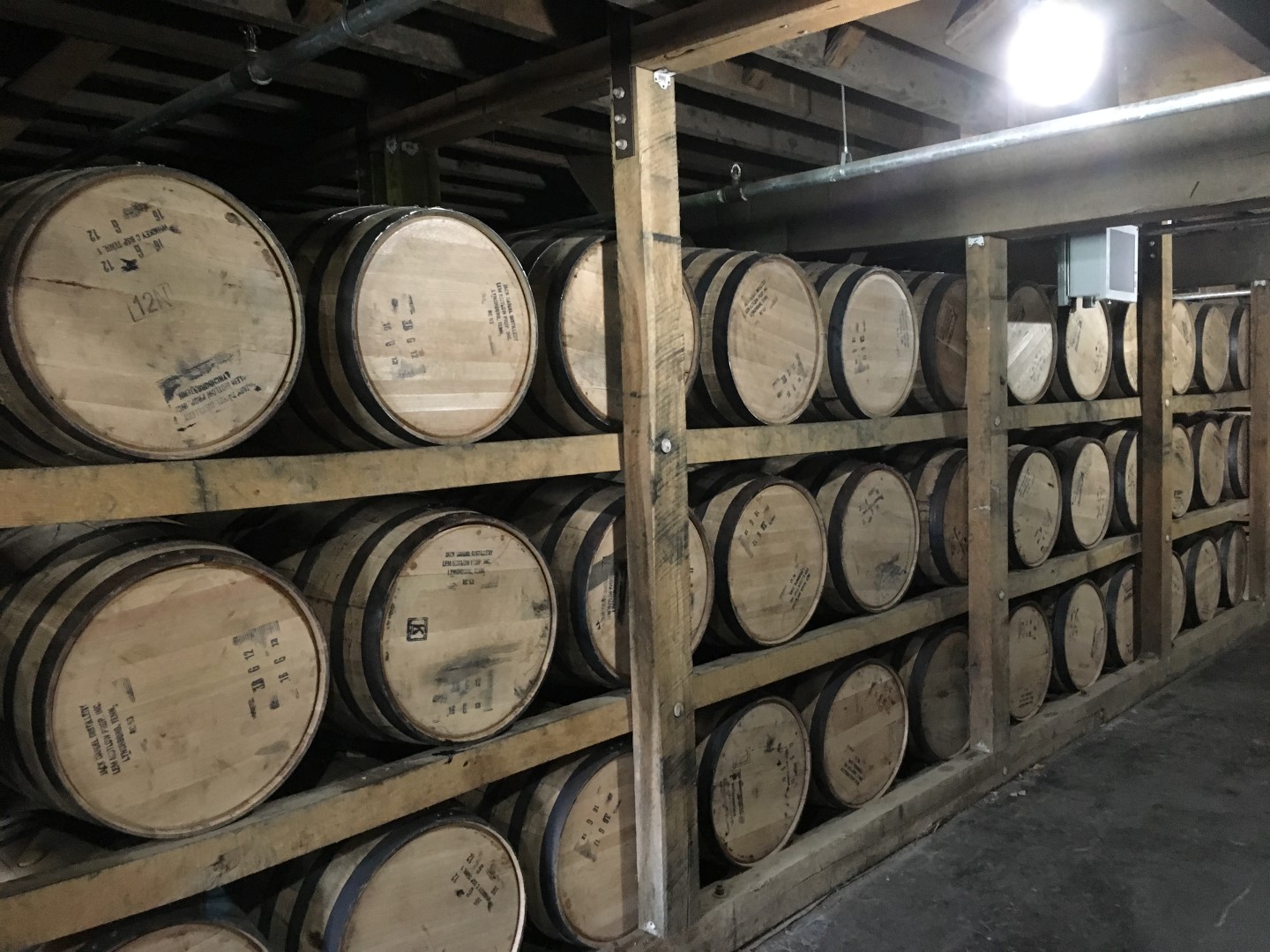