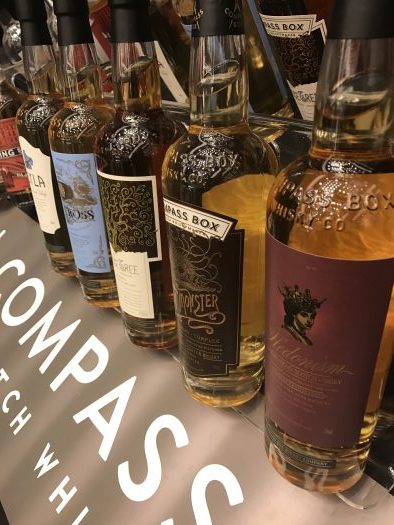 WhiskyFest remains one of the best ways to meet other spirits enthusiasts, hear from some of the industry’s biggest names, and of course try a wide variety of whisk(e)y, including many hard-to-find and expensive offerings. The VIP ticket, which provides an additional hour of sampling, is particularly useful for discovering the true rarities, as most exhibitors showcase a special bottle (sometimes literally just one) only for that hour. Although celebrating its 20th year in 2017, this was only the second time the event has been held in my backyard of Washington, DC. As with years past, I discovered some real gems, sampled heavily, and stopped being able to really taste anything after about 8 o’clock. Notes on everything before that are below.

AnCnoc Highland Single Malt Vintage 2001 / B / a golden, creamy whiskey with some pleasant stone fruit notes
Balvenie Tun 1509 Batch 3 / A / a real standout this year; sugar cookie nose with layers of dried fruit and baking spice notes; honeyed with a long finish
Deanston 20 Years Old / A- / the Oloroso finish shines at cask strength along with hints of gingerbread and a syrupy sweetness
Compass Box Flaming Heart 2015 Limited Edition / A / incredibly balanced and sultry; sweet smoke nose and a palate full of iodine and sugary oak
Compass Box Spice Tree Extravaganza / B / sweet and floral with coconut on the palate; a bit thin
Compass Box This is Not a Luxury Whisky / B+ / bolder than expected and almost too sweet, but wonderfully smoky with faint dark fruit notes on the finish
Ardbeg Kelpie Committee Release / A / matured in virgin oak from the Black Sea region; the palate is chocked full of sweet, oriental spices in addition to the honeyed brine and peat smoke of traditional Ardbeg
Ardbeg Kildalton / A- / a mix of sherry and bourbon casks; soft on the nose and gentle on the palate with a good balance of vanilla sweetness and raisin notes
Craigellachie 23 Years Old / B+ / the oldest Craigellachie in the range described as “meaty,” but I was getting more fruit and herbal notes on the palate
Alexander Murray & Co. The Glenrothes 22 Years Old / B- / honey sweet with minimal complexity; some anise and spice on the finish
Balblair 1983 / A / tons of caramel on the nose with a rich bourbon-inspired palate, cinnamon biscuit and semi-sweet chocolate developing into a slightly smoky, brown sugar finish

William Larue Weller / A- / cinnamon sugar nose with a syrupy palate that leaves a fantastic menthol and cinnamon RedHot flavor in the roof of the mouth
George T. Stagg / A- / hot brown sugar under loads of alcohol (72%!) but developing into chocolate and pipe tobacco
Blood Oath Pact No. 3 / A / rich caramel and dark fruit nose with a vanilla custard and berry palate, slightly drying on a long finish
Minor Case Straight Rye Whiskey / B+ / sweet with subtle rye spice on the nose, dark fruit and a little dill on the palate; good balance of the sherry and rye
Yellowstone Limited Edition 101 Proof / A- / great oak nose and subtle red fruit notes layered with toffee and rye spice
Elijah Craig 23 Year / B+ / caramel and oak nose with a palate dominated by cinnamon and drying tannins
Four Roses Small Batch Limited Edition / B / more fruit on the palate than the standard small batch but lacking the complexity and body of previous editions
Hillrock Sauternes Finished Rye / B- / black tea and caramel nose but the palate seems unbalanced; clove and rye spice overpower the dark fruit in the wine cask
Hillrock Sauternes Finished Bourbon / B+ / floral nose with vanilla; baking spice notes integrate well with the wine cask, leaving a lingering raisin quality on the finish
Sagamore Spirit Cask Strength / A- / a great craft, cask strength rye; rich honey and vanilla on the nose with a creamy texture showcasing more of the same on the palate along with a warming rye spice
Wild Turkey Master’s Keep Decades / B+ / a complex nose, chewy body, but the palate falls flat with too much menthol and candy corn
FEW Spirits Bourbon (Delilah’s 23rd Anniversary Bottling) / B / a touch of grain and shoe polish on the nose, tart cherry notes on the palate fading to cinnamon; interesting but not exactly an easy sipper

The Quiet Man Traditional / B+ / light on the nose with a buttery palate showcasing simple but enjoyable vanilla and faint citrus notes
The Quiet Man Single Malt 8 Years Old / A- / toasted cereal nose with honeysuckle; a luscious palate that is also soft and light with vanilla, fresh ground cinnamon, and nutmeg