What’s the Difference Between Syrah, Petite Sirah, and Shiraz? 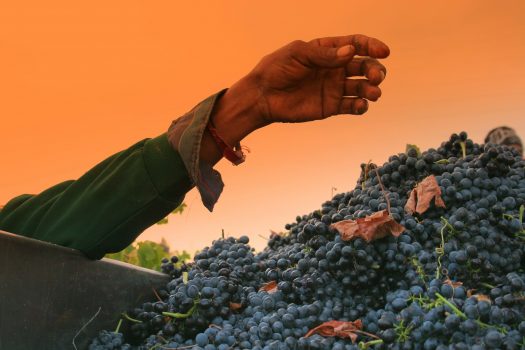 So you’re browsing the wine aisle at your favorite store, you have a pretty good handle on what a Cabernet Sauvignon is, and what a Pinot Noir is, but there’s always a group of red wines you’ve never quite gotten a handle on: Syrah, Petite Sirah, and Shiraz. What do these wines taste like, what are the differences between the three, are they named after a grape, like Cabernet, or are they a blend, like Meritage?

To start with, Syrah and Shiraz are exactly the same, just different names for the same grape. It’s called Shiraz in Australia, and Syrah in most other parts of the world, though a few California wineries like Coppola buck this trend and call their bottlings Shiraz. Shiraz is also the name of an ancient city in Iran where some of the oldest wine ever discovered was found, and it’s thought that the grape may have originated in this region. Legend has it that the grape was brought to the Rhône valley in France by the ancient Greek Phocaeans, or perhaps by French crusaders, though of course we have no way of knowing for certain, and it could just be a natural French grape with a lot of mystery around its origin.

In France, Syrah is usually blended with grapes like Grenache, Mourvèdre, and Cinsault to make wines we call Rhône blends, like Côtes-du-Rhône or Châteauneuf-du-Pape, whereas in other countries like the United States, Australia, or Spain, Syrah is just as often blended with a variety of other grapes or simply bottled on its own. Syrah wines are typically lighter than a bold Cabernet, but heavier than a Pinot, with a more extracted fruitiness that can be similar to Zinfandel. Depending on the climate and the bottling, Syrah can be a fruit bomb, all blackberry and raspberry, or it can be a peppery, spicy, tannic, and often smoky powerhouse, designed to be cellared for years. Try Syrah as an alternative to either Cabernet or Zinfandel, with rich foods like barbecue that won’t be outdone by the wine’s body.

So what is Petite Sirah, then? It’s not yet another name for Syrah/Shiraz, but is in fact a totally different grape. While Syrah’s origins are shrouded in ancient mystery, we know exactly who is responsible for Petite Sirah, and when; the grape was bred by a Frenchman named Durif in the mid-1800s and was mostly planted in the United States, where it was incorrectly labelled as Syrah for decades. Despite its minuscule-sounding name, Petite Sirah is one of the biggest, boldest grapes available, with massive tannins protecting gobs of blackberry, chocolate, plums, and pepper. Drinkers used to the biggest, boldest California Cabernets will love Petite Sirah, though unlike Cabernet and Syrah, Petite Sirah doesn’t age exceptionally well and should be consumed within a couple years of its vintage. For a food pairing, you’ll want a meal as big and bold as the wine; barbecue beef and pork is still a good choice, and stuffed peppers or heavy cheeses make good pairings with Petite Sirah, as well. One of the major uses of Petite Sirah is as a blending grape, particularly with Zinfandel; a huge number of California Zinfandels contain up to 10 percent Petite Sirah in them.

While Syrah and Shiraz are identical outside of the vineyard where the grape was grown, Syrah and Petite Sirah are quite different, despite both being generally bold, fruit-forward wines. Syrah is very versatile and can be used to make outstanding blends, whereas Petite Sirah is a good choice for a bold Cab lover looking for something new.