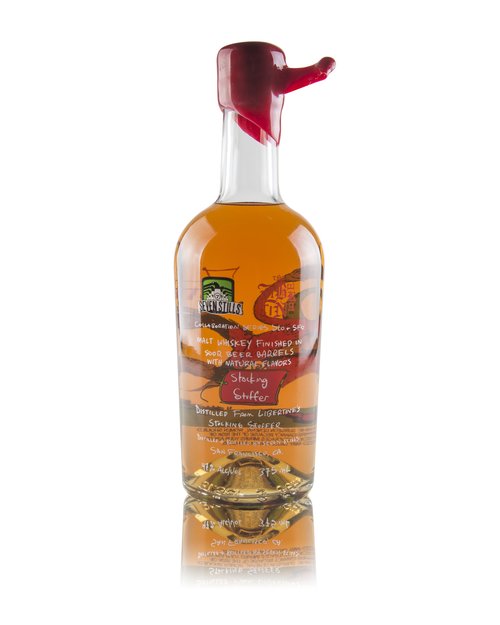 Seven Stills of San Francisco has recently embarked on a series of collaborative productions, whiskey made from beer produced by other notable breweries. For Stocking Stuffer, 7 Stills takes San Luis Obispo-based Libertine’s Wild Sour Stout, distills it, then ages the distillate in New American Oak and finishes the whiskey in Libertine’s own sour beer barrels.

Whiskey distilled from a sour beer, then finished in sour stout barrels? Now that’s a concept! Here we have a wholly unique spirit that kicks off with beery aromas — not particularly sour, but sharp with hops and notes of roasted vegetables and pipe tobacco. On the palate, more of a sour note comes to the fore, very sharp with notes of fruit vinegar and sour cherries emerging right away. But as the whiskey evolves in glass, the flavors don’t really take it very far — the initial experience endures for the long haul, at least until the finish, where a few grates of slightly bitter citrus peel await the drinker. That’s a strange bit of a letdown at the very end — but what surprises the most is how well this drinks despite an abv that’s just shy of 58%.

Sour beer fans, snap this up while you can. (It’s in extremely limited release now.)