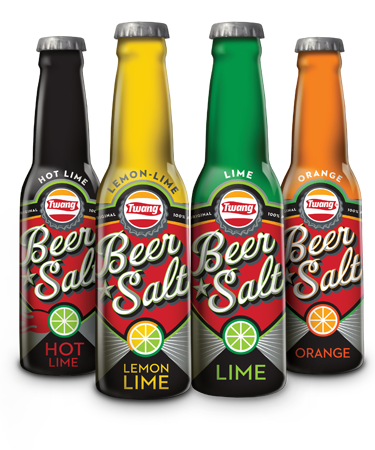 It’s common to jam a wedge of lime into your beer when sipping on a Mexican lager. Others prefer a lick of salt instead of the sweet-and-sour kick of citrus, and that’s why Twang — “The Original Premium Beersalt” — exists.

Twang, which also makes a line of margarita salts, sells five different flavors of beer salt (none of which are just “salt”), in little bottles that you apply directly to the glass or the rim of your bottle as you drink. New to the game is its Clamato Chili-Lime Salt, which is sold in a small can and which is designed for Micheladas, Bloody Maries, and other tomato-centric beverages. The little bottles are resealable and portable… and should last for quite a while in normal use.

Ideally no beer you drink should need manipulating in order to be palatable, but I know you don’t always have a choice of what to sip on — or maybe you just want to try something new for a change. Either way, keep reading for reviews of all five beer salts, plus the Clamato version.

Twang Michelada Especial Beer Salt – There’s a nice and well-balanced mix of tomato, lime, chili pepper, and salt in this, and it pairs quite well with lager. You really can taste all the disparate elements, which is quite a surprise. It’s clearly a way to make a poor man’s michelada, you bet, but there’s nothing wrong with slumming it once in a while. A-

Twang Lemon-Lime Beer Salt – Leans heavily on the lime, but lemon gives it a stronger kick on the back end. I was less thrilled with it as a pairing companion for any beer, but perhaps experimenting with different beer styles would find a more natural mate. B-

Twang Lime Beer Salt – As the above, without the lemon kick on the back end. I really enjoy a lime in my Pacifico, but this just didn’t replicate the experience for me. Too salty perhaps? B-

Twang Orange Beer Salt – Extremely orange heavy — only a salty kick late in the game distracts from the idea of Pixy Stix — presumably designed for use with wheat beers. It’s not really to my taste, but again, this could be a question of finding the right beer to pair it with. Either way, it’s less versatile than I’d like. C+

Twang Hot Lime Beer Salt – Less fiery than I was expecting (and hoping for), but the addition of spice gives the lime flavor more versatility and intrigue. A reasonable pairing with lagers, but still quite tart and lingering beyond its welcome. B

Twang Clamato Chili-Lime Salt – Again, this is a slightly different product intended for more than just beer, but as with the Michelada salt above, it fights above the expected weight. The two products are actually quite similar, though this one has less salt, larger granules, and just a hint of that briny shellfish character. Definitely a keeper for bloodies, (real) micheladas, and other exotic drinks. B+

Review: Sol Chelada
Posted in Buy It Now, Garnishes, Rated A-, Rated B, Rated B-, Rated B+, Reviews