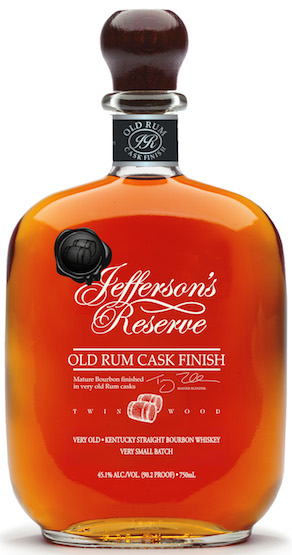 The barrels themselves have a compelling history — they held bourbon for four years, then held Gosling’s for 16 years, then were sent back to Jefferson’s for this experiment, in which he dumped the eight-year old, straight Kentucky whiskey. The bourbon aged for 15 additional months in these barrels before bottling.

So, fun stuff from the get-go, and sure enough it’s a knockout of a whiskey.

The nose is loaded with molasses notes, brown sugar, tons of baking spice, some coconut husk, and only a smattering of wood. If I didn’t know any better, from the nose I’d probably have guessed this was a well-aged rum instead of a whiskey.

The palate belies the bourbonness of the spirit, melding caramel corn with a big injection of sweet caramel, dark brown sugar, cinnamon, and layers of chocolate sauce — both sweet milk and bittersweet dark. The rush of sweetness isn’t overpowering, but rather fades easily into its lightly wooded, vanilla-focused finish.

This is one whiskey that’s hard to put down. I’d snap it up on sight before it’s all gone.

A / $80 / jeffersonsbourbon.com [BUY IT NOW FROM CASKERS]