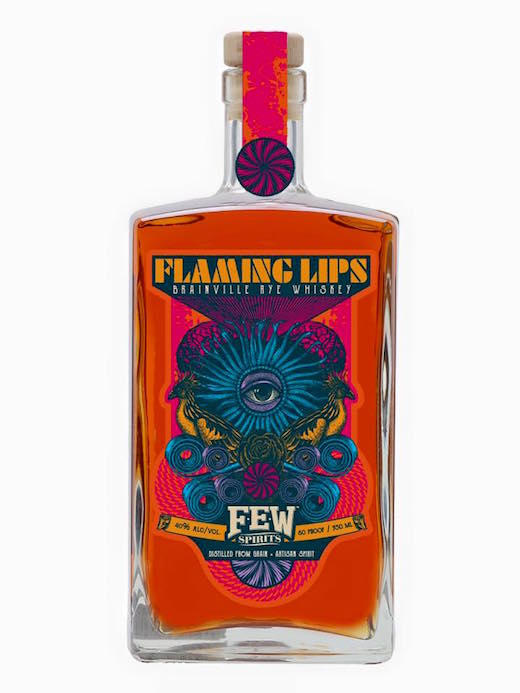 Celebrating five years in business, Chicago’s Few Spirits recently launched a collaboration with The Flaming Lips and artist Justin Helton to release a new rye called Brainville. Why? Read on…

The collaboration actually holds quite a bit of resonance for FEW Spirits’ founder and master distiller Paul Hletko: Before founding the distillery, he played lead guitar in a band called BerBer (short for Bourbon Bourbon, ironically) that got some local radio airplay and a feature at the CMJ Music Marathon in the early ’90s; ran a short-lived record label called Hank’s Recording Empire (“we put out one record, and it was a dismal failure,” he says); and opened a guitar effects-pedal company called Custompbox. “Music has always been an important part of my life, and when Justin Helton’s manager called me about a collaboration with The Flaming Lips and Warner Bros. Records to create a custom spirit, it was a no-brainer; they knew exactly which distillery they wanted to work with,” Hletko says.

The whiskey is a rye made with corn and malted barley grown within 150 miles of the Few distillery. Aging is in new, charred American oak barrels custom-made in Minnesota. (No age statement is offered.) Like Few’s standard rye, the mash is, unusually, fermented using a French wine yeast.

This is a young craft whiskey, dominated by notes of fresh grain, lumberyard, and a bit of Band-Aid character on the nose. Nothing too special, but on the palate emerges something considerably more complex and intriguing. Notes of malted milk give the whiskey a chewy backbone, before moving into spicy red pepper, ginger, and baking spice notes. There’s a youthful wood influence here, but it’s outdone by quiet fruit laced with spices and a finish that echoing melon and a grind of pepper. All told, it’s quite a compelling experience, though you’ll pay a pretty penny for the privilege.