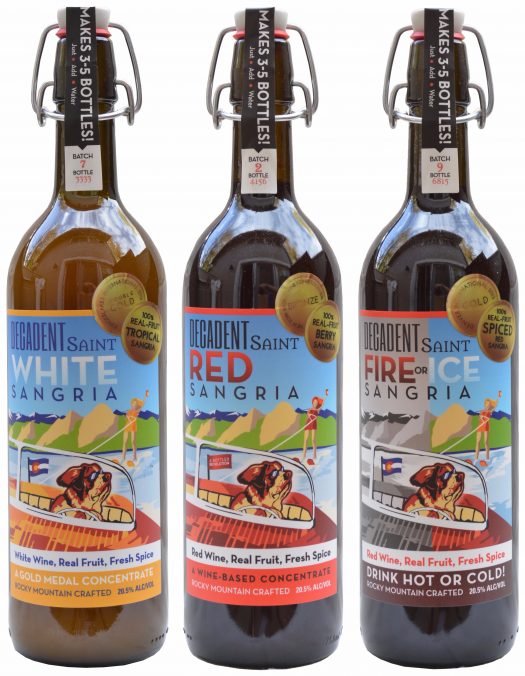 Decadent Saint is a company run by Michael Hasler, an enologist from Australia whose letter to me in impeccable calligraphy introduced a unique product: concentrates made from wine intended to be diluted into sangria and other fanciful beverages.

These are all natural products, packaged in swing tops and designed to be mixed on the fly. Directions generally suggest adding one part mix to 3 to 5 parts water, sparkling water, or sparkling wine — each option will give the finished drink a different tone. Some bottlings can be served either on ice or warm.

We tried all four of Decadent Saints’ offerings. Each is bottled at 20.5% abv as a concentrate, so expect a much lighter finished product once they’re watered down.

Decadent Saint White Sangria – White wine, fruit, and spices. Very heavy with peaches and apricots — even with water it comes across at first like a mimosa. Some light citrus ekes through late in the game, with mango heavier on the finish. This is a simple concoction, but it’s really quite lovely and overflowing with an abundance of fruit. I like it just fine as a still beverage (no sparkling water or wine), but it works well both ways. Reviewed twice: Batch #7 and #8. A [BUY IT NOW FROM DRIZLY]

Decadent Saint Red Sangria – Red wine, fruit, and spices. Heavy with red berries, with raspberry especially prominent. Citrus, mango, and even some banana notes make a showing later in the game. It’s a bit sweeter than I expect from sangria — this drinks a bit more like a wine cooler than a sangria — but those who like their sangria on the fruity side will probably gravitate heavily to this concoction. Water is fine, but sparkling wine gives this a much-needed kick. Reviewed: Batch #3. B+

Decadent Saint Fire or Ice Sangria – Another red sangria — also billed as containing red wine, fruit, and spices — with a twist. “Drink hot or cold,” hence the name, so it could work as either a chilled sangria or a holiday glogg. I tried it at a bit below room temperature but can totally see the appeal as a hot beverage, its plummy/raisiny core and a healthy slug of cinnamon and nutmeg giving it a distinct holiday feel. Sparkling wine helps to cut through some of the sweetness here, which is amped up above that of the white sangria, but with less of that classic apple/berry/citrus character one expects in a standard sangria. Reviewed: Batch #9. B [BUY IT NOW FROM DRIZLY]

Decadent Saint Rocky Mountain Rescue – Here we find Hasler going straight up loco. This is a blend of red wine, dark chocolate, decaf coffee, berries, and spices. The taste is, perhaps unsurprisingly, exactly what you are expecting: a nutty, mocha-heavy coffee experience with a finish that leans toward dried berries and jam. There’s more raisin and cinnamon on the somewhat gummy palate, particularly on the back end, and lengthy, lingering notes of gingerbread and milky coffee. I like all the flavors in this bottle… I’m just not really enchanted by them all mixed together. Reviewed: Batch #6. B-