Book Review: Quench Your Own Thirst 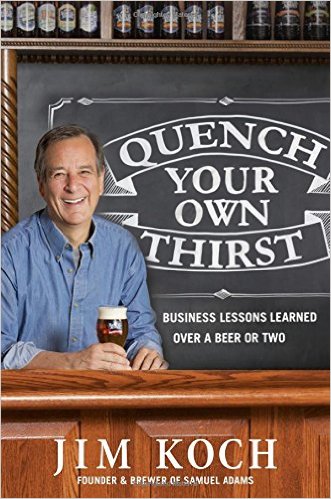 Ever wonder how Jim Koch got Samuel Adams started? Now you can, in Koch’s memoir that is part business story, part insider guide to the booze trade. It’s a relatively straightforward work as Koch meanders from his first act as a management consultant to the founder of a scrappy brewing operation to the CEO of the largest independent brewing company in the U.S.

It’s all quite linear, starting in 1983 and ending in the near present. The book really flies by: Some chapters are just a three or four pages long. Some aren’t even a full page. All the while, Koch focuses on his mantras about doing what you believe in, focusing on quality, the value of experimentation, and making do with as little as possible. A lot of it is standard business/management/go-get-’em sentiments, but all of it is still good advice.

Throughout, Koch offers anecdotes about what he knows about beermaking, plus gossip about the beer industry at large. Did you know that German beers exported to the U.S. had sugar in them (at least at once)? That Sam Adams could have ended up with the name of Sacred Cod?

If you’re a businessperson or aspiring entrepreneur who enjoys beer, Quench Your Own Thirst will be right up your alley. Hell, you don’t even need to like beer that much — the stories from the trenches are fairly universal. If, however, you’re a beer fan looking to better understand what goes into what it is you’re drinking, I would probably suggest a more general tome on the topic over Koch’s memoir.

Quench Your Own Thirst