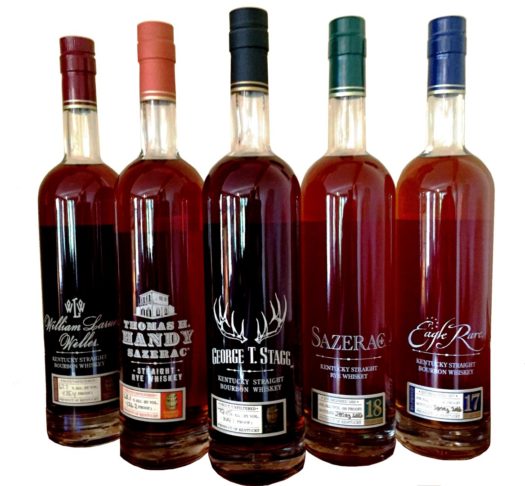 Here’s a quintet of whiskeys you might have heard of once or twice. Yes, the Buffalo Trace Antique Collection has arrived, which will probably be sold out before I finish typing this sentence. Well, if you’re a glutton for punishment and want to take a stab at finding one of these rarities — particularly because this year’s batch is so exceptional — read on for the reviews.

Sazerac Rye 18 Years Old 2016 – Last year’s Sazerac 18 was famously bottled from the last drops of its massive quantity of well-aged rye, which had been sitting in tanks since 1985. 2016 marks the first “new” batch of Sazerac Rye in more than a decade. Distilled in 1998, there’s no tanked spirit in this batch — and, Buffalo Trace says, there won’t be any more tanked whiskey going forward. As it should, the whiskey tastes a bit different now, quite spicy on the nose with a huge baking spice punch while hanging on to its classic notes of brandied cherries, juicy raisins, and a layer of sandalwood. Some grassiness emerges on the nose, given time. The palate is racier and drier than expected, peppery on the back of the palate while allowing its cherry core to shine and light, toasty wood notes to emerge. The finish is lasting and allows some brown sugar notes to shine through, adding some balance to the lingering lumber. It may not be the same Sazzy 18, but it’s still a beauty. 90 proof. A- [BUY IT NOW FROM DRIZLY] [BUY IT NOW FROM FROOTBAT]

Eagle Rare Bourbon 17 Years Old 2016 – The 2016 edition of the classic Eagle Rare 17 has been aging on the first, second and third floors of Warehouses H and K. The nose feels racier than usual, eventually settling down to reveal some surprises: exotic and heavily tropical notes of coconut and pineapple, with a healthy dollop of vanilla on top. This highly unexpected but delightful nose spills over onto the palate, which is well-sweetened to the point where it approaches rum, although that is tempered by plenty of wood later in the game. Some more toasted coconut and almond notes emerge on the back end, alongside a modest level of barrel char. It’s at once strikingly unusual and, at the same time, a classically fruit-forward bourbon that is well worth exploring. 90 proof. A [BUY IT NOW FROM DRIZLY]

George T. Stagg Bourbon 2016 – Always the centerpiece of the BTAC yet often overblown, this year’s Stagg is a cherry-picked compilation of 142 barrels sourced from warehouses M, N, H, L and K. Old stock, high proof, as always — this one’s over 72% abv, bruising even by Stagg standards. Notes of unlit cigars, rosemary, and cloves kick things off on rich and dense yet surprisingly balanced nose. Another surprise: At full proof the bourbon doesn’t completely overwhelm the palate with alcohol, but it is so dusty and drying on that it’s tough to cut through the massive amount of tannin to really appreciate what’s going on. Water is always Stagg’s best friend, and this year is no exception, eventually coaxing sweetness from that intense tobacco character, plus cherry fruit, loads of vanilla, torched marshmallow, and more cloves. As it opens up in the glass — again, particularly with water — it develops an intensely smoky aroma, which is a natural companion with the tobacco notes but which does tend to dull the fruit and leave your mouth a bit dry. That aside, this year’s expression is quite unique and worth some exploration, nearly earning the vaunted reputation it’s always had. 144.1 proof. A- [BUY IT NOW FROM CASKERS] [BUY IT NOW FROM DRIZLY]

William Larue Weller Bourbon 2016 – A 13 year old expression of Weller — uncut, unfiltered, wheated recipe bourbon distilled in the spring of 2003 and aged on the third and sixth floors of Warehouses D, K, and L. As is becoming the norm with these BTAC Wellers, the nose is quite sweet, with (again) a butterscotch influence, plus marzipan and peppermint. The palate backs these up, but the finish takes a turn toward a more spicy, wintry character. While approachable at full, uncut proof, water may not be a bad idea, though more than a drop or two tends to dull some of the sweetness that otherwise makes this year’s Weller so compelling. One of the best expressions of W.L. Weller I’ve had in many years. 135.4 proof. A- [BUY IT NOW FROM CASKERS] [BUY IT NOW FROM DRIZLY] [BUY IT NOW FROM FROOTBAT]

Thomas H. Handy Sazerac Rye 2016 – As always, this is a good-old six year old rye, the baby of the group, this installment distilled in the spring of 2010 and aged on the fourth, fifth and seventh floors of Warehouses I, K, and M. This year’s expression is better than it usually is, though the relative youth comes across immediately on the nose — moderately woody, with some butterscotch underneath. The tannin hits hard on the palate — those pushy lumberyard notes really lingering at the back of the throat. Unlike with the Stagg, water doesn’t restore balance but just dilutes the whole affair, bringing forth notes of burnt toast, heavy cereal, and lots of smoky oak. The finish is dusty and slightly green. There’s nothing all that offensive here, but compared to this field (or any other top shelf whiskey) it is just very ordinary. 126.2 proof. B [BUY IT NOW FROM DRIZLY] [BUY IT NOW FROM FROOTBAT]

about $1000 each [BUY THE COLLECTION FROM FROOTBAT] 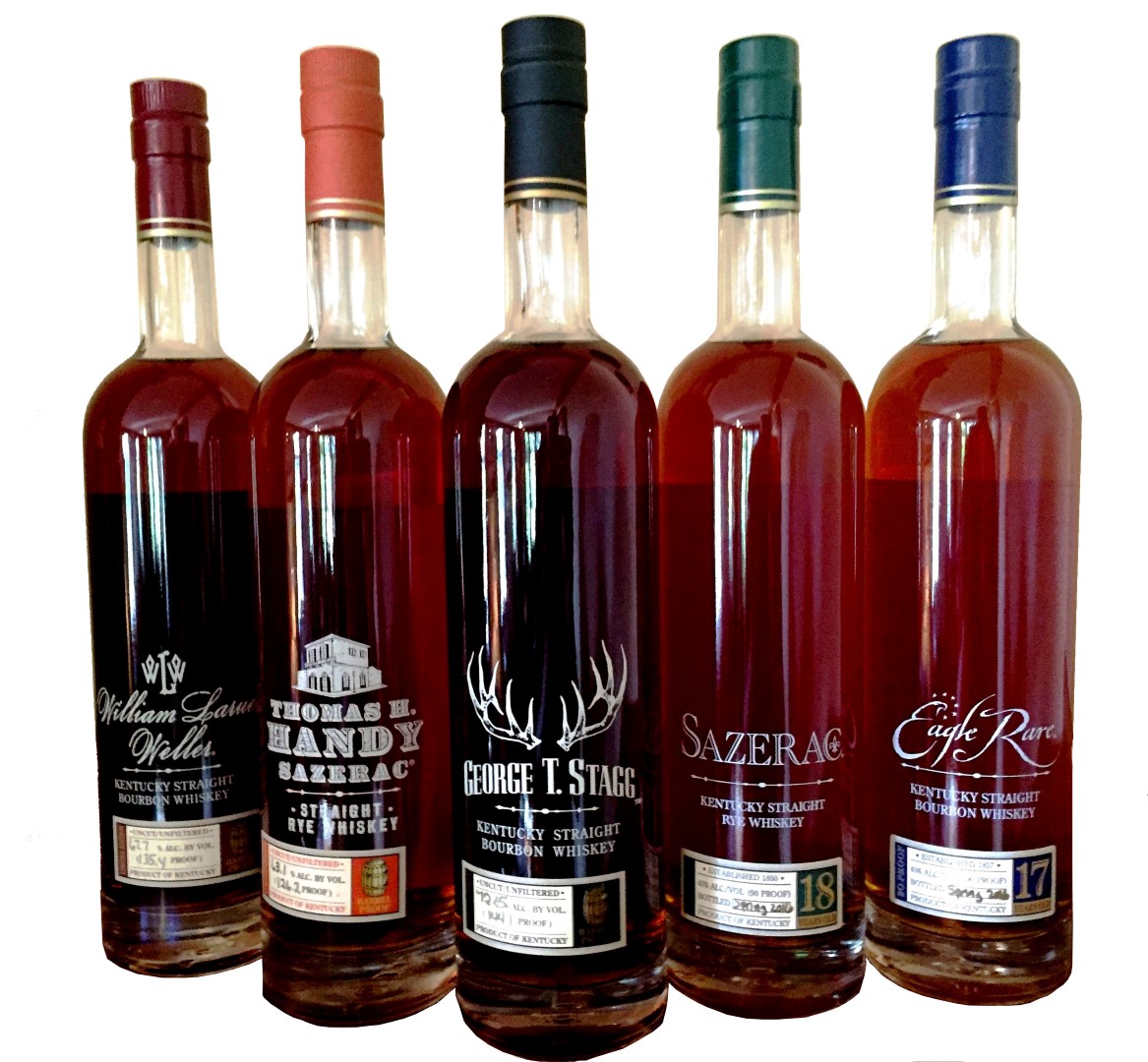