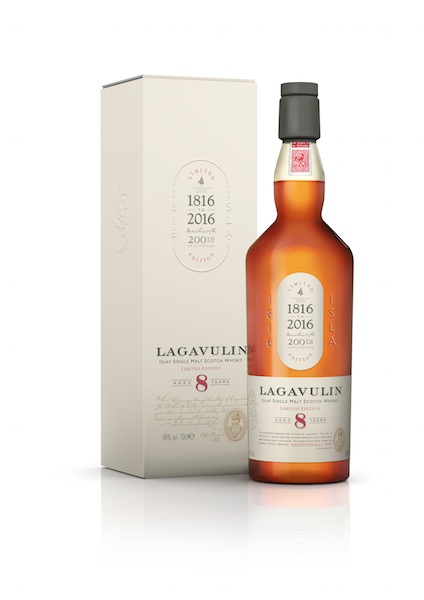 To celebrate its 200th anniversary in 2016, one of Islay’s most beloved distillery’s has released a special bottling. No, it’s not a gorgeous 50 year old in a Baccarat decanter. It’s an 8 year old, just half the age of its signature release, Lagavulin 16.

Why 8 years old? Lagavulin tells us there’s a reason:

Lagavulin is kicking off the bi-centennial celebrations with the release of a special limited edition bottling of Lagavulin 8 Year Old, inspired by Britain’s most famous Victorian whisky writer, Alfred Barnard. During the late 1880s, Alfred Barnard sampled an 8 year old Lagavulin during a visit to Islay, describing it as “exceptionally fine” and “held in high repute.” This anniversary release is an honorary nod to the whisky that helped lead to the emergence of Lagavulin as one of the most highly sought after Scotch whiskies today.

Other than the age statement, there’s no particular production information available.

The whisky is a surprise at the start. First there’s the color — a pale, light gold that seems like eight years might be a stretch. On the nose: Pure Islay, intense and pungent smoke, filtered through iodine and layered with citrus, a bit of cereal, and a touch of mint. The palate finds a surprising level of sweetness, offering sweet hickory barbecue smoke, brown sugar, and some elusive floral elements that keep the experience on the light and lively side.

By the time the finish rolls around, things sadly start to fall apart a bit. The initially rounded and somewhat oily body starts to degenerate into a gummy character that’s overloaded with asphalt notes and a flavor that comes across with the essence of a long-disused vial of dried spices. It’s a bit of a letdown from what is initially a fun and quite lively whisky — though it is one that I can still cautiously recommend that Lagavulin fans at least sample once or twice.