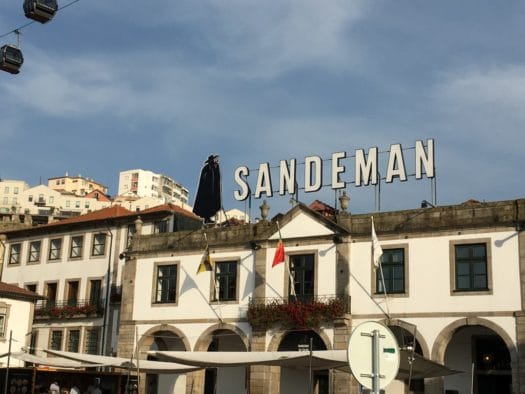 Port is unlike any other wine you’ve tasted, and as such it’s only fitting that the place the make it — Porto and the adjacent Douro Valley — is unlike any wine region you’ve visited, either.

For those unfamiliar with Port wine, a brief primer is in order. All Port is made here in northern Portugal, and though over 100 varieties of grapes are certified for use in Port production, only five of these are common: tinta barroca, tinta cão, tempranillo, touriga francesa, and touriga nacional. Few Port makers keep tabs on what grapes go into any given bottle of Port. Most Douro vineyards harvest and vinify field blends. 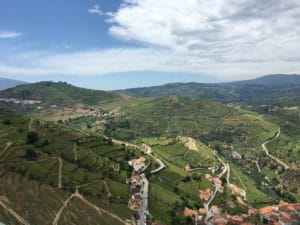 The grapes for Port are exclusively grown in the Douro — an unending series of breathtaking, beautifully-stepped mountainside vineyards that wind along the path of the Douro River. The factory farm era has yet to reach the Douro, and it probably never will. Nearly 40,000 farmers work this land, some with parcels as small as an acre or less. Anyone making Port must work with a patchwork of dozens or hundreds of growers in order to obtain fruit, after which the grapes move from the vineyards to various wineries in the region, which are here called quintas. This is where the wine is actually made.

Our friends at Taylor Fladgate graciously spent a day driving us around the Douro, where we visited the company’s three properties at the namesake Taylor Fladgate, Croft, and Fonseca. Each quinta has its own DNA and sense of style, from the crowd-pleasing scene at Croft to the brutally hot and quaint Fonseca. You can taste the stylistic differences in the wines, too, but more on that in a bit. 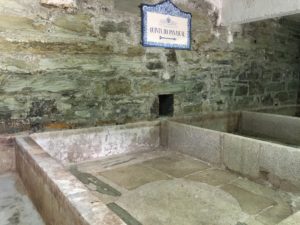 The process of making Port is wildly different than that of table wine. While the juice for dry table wine can ferment for a month, Port grapes ferment for only two or three days, after which time the fermentation, still low in alcohol and high in sugar, is arrested by the introduction of fresh grape brandy (about 77% alcohol) or another very high-alcohol spirit, roughly 4 parts wine to 1 part spirit. The alcohol kills the yeast and preserves the sugar remaining in the wine, bringing the abv down to about 20%. This is all done with surprisingly old-school production, and in the Port world, tradition reigns supreme to this day: Most quintas actually still foot-tread their grapes instead of relying on machinery to crush grapes into juice (those are empty lagares above; here’s a video of the crushing in practice). Treading is done in silence and takes hours and hours to complete.

From here, the winemaking process diverges quickly depending on what type of Port you’re making. Once a relatively simple drink, Port innovators (led by Taylor Fladgate) have expanded the varieties and styles of Port on the market considerably. Ruby Port is the most basic: Fresh wine is put into enormous vats (often made of chestnut) that hold thousands of gallons of juice. It slumbers here for about two years until bottling, bright red and alive with sugar.

Tawny Port is the other primary variety. Tawnies are stored in smaller casks called pipes, each about 550 to 620 liters in size. Tawnies take on some wood influence but, critically, oxidize much more quickly in the smaller barrels. These are then blended and bottled as 10, 20, 30, or 40 year old wines — though this, paradoxically, does not refer to the actual age of the wine but of the general “style” of what’s inside. Drink a 30 year old Tawny and you are assured of getting “30 year old quality” — not necessarily any wine that is really 30 years old. 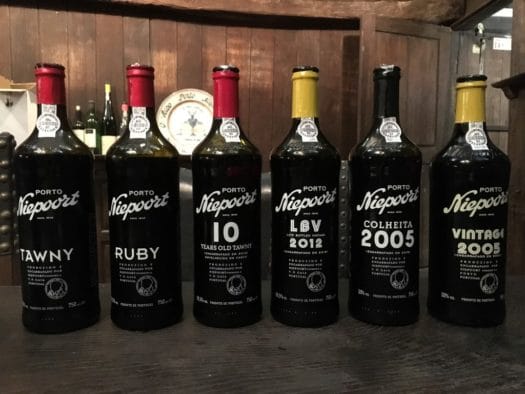 Vintage Port is simply Ruby Port that comes from a single vintage. It’s only made in the best years, 2 or 3 times per decade. Vintage Ports command the highest prices of all Port wines, and they can be aged in bottle for many, many decades. Late Bottled Vintage Port is a bit confusing, because it has a vintage date on it, but it is not Vintage Port. LBV Ports come from quintas other than those used for Vintage Port, and are aged in cask much longer than the typical Ruby (5 to 6 years is common), which often gives it a deeper and more raisiny, almost Zinfandel-like character. It’s not as ageworthy as Vintage Port (LBV can usually be consumed right away), but can be considerably less expensive than Vintage Port.

Single Quinta Vintage Port also adds to the confusion because it is Vintage Port released from single wineries, as the name suggests, usually in years that a Vintage Port is not declared. They age in bottle just like Vintage Ports but can be purchased for much less. Lastly there are Colheita Ports, which are vintage-dated Tawny Ports. While regular Tawnies are blends of a wide range of vintages, Colheitas come from a single one. 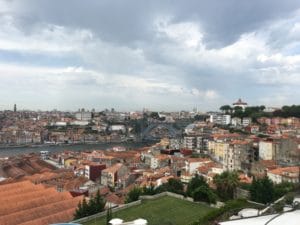 From the Douro to Porto

All of this aging takes place not in the Douro Valley quintas but rather in the city of Porto — or rather, in the Villa Nova de Gaia, which is the part of Porto that is on the east side of the Douro River. Nothing involving Port wine happens on the western Porto side (which features the old city center and most of the town’s industry). In Gaia, it is seemingly nothing but Port houses, which are called lodges in the local parlance. Why “lodge?” Simply because it sounds better than “warehouse,” of which there are dozens in Gaia, each of which is often emblazoned with a huge sign bearing the name of the owner in monstrous letters, making for a truly unique skyline. Wine is aged here instead of in the Douro exclusively because of the heat. In Porto it can easily be 20 degrees cooler than in the Douro — though modern air conditioning is starting to change this for a few producers.

Visitors to Porto can walk along the waterfront and visit any number of these Port producers, most of which have tasting rooms and visitors’ centers, just like you’d see in any highly touristed wine region. Some, like Taylor Fladgate, are incredibly modern, including such up-to-the-minute touches as a “selfie station” next to a giant barrel of Ruby Port. Some, like Niepoort, are exactly the opposite. Niepoort isn’t open to the public and doesn’t even have a sign on the door — in fact, the building doesn’t even have a proper floor. At Niepoort’s lodge, the ground is simply made of packed earth that can be hosed down to cool things off on hot days. Spiders are encouraged to roost in the windows; their webs help block out the sunlight. (Many thanks to Niepoort for giving us access and a private tour of the facility.) 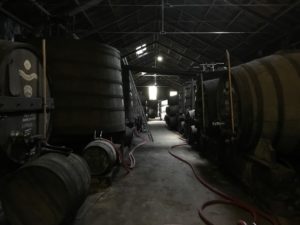 Most visitors to this area never leave Porto, and that’s fine. You can taste dozens of Port wines here and get the full scoop on understanding how Port is made if you never leave Gaia, but visiting the Douro itself is a day trip that’s really worth it — not just for the wine but for the unforgettable scenery, too. (Taylor Fladgate operates luxury hotels in both Porto (The Yeatman) and the Douro (The Vintage House), so you can easily spend a day in both locations if you’re game.)

Before we move on to some Port wine reviews, here’s one pro tip for drinking Port. Everywhere in Portugal, Port — no matter what the variety — is served at least slightly chilled. (White Port and Rose Port are typically served well-chilled.) Having Ruby and Tawny Ports about 10 degrees colder really makes a difference. In America, we tend to see these wines poured at room temperature, which puts a heavy focus on the brandy rather than the fruit, making Port taste “hot” with alcohol. By chilling things down, you’ll often find that the wine showcases a whole new dimension of character.

Many thanks to Taylor Fladgate for taking the time to give Team Drinkhacker a tour of the Douro and the Taylor Fladgate lodge in Porto. Taylor’s tasting center in Gaia is absolutely not to be missed if you visit.

And now, a catalog of the many Port wines we encountered during our time in the Porto and the Douro.

Niepoort Tawny Port – A sweeter style of tawny than usual. Dark tea, brown sugar, cloves, and ginger notes. A bit tarry on the finish. B+

2005 Niepoort Tawny Colheita – Strawberry and mint start things off on a wine that showcases lots of depth. The finish evokes figs and dates. Very rich and lovely. A

2005 Niepoort Vintage Port – Very dense, with intense chocolate, dark raisin and prune character, and some honey on the finish. Still needs years of time to mature. A-

Caves Vasconcellos 10 Years Old White Port – Unusual to see a white port with an age attached; this one offers a sherry nose, orange peels, flowers, and golden raisins. A-

Caves Vasconcellos 10 Years Old Tawny Port – A little thin and rather plain. Leathery with subtle coffee notes and touches of figs. B

Taylor Fladgate Chip Dry White Port – Extra dry style, spends three years in wood. Fragrant and lightly nutty. Not sold in the U.S., it was the first White Port ever marketed. B+

Taylor Fladgate 20 Years Old Tawny Port – Heavily oxidized on the nose, with notes of orange peel, nuts, and a touch of coffee. B+ 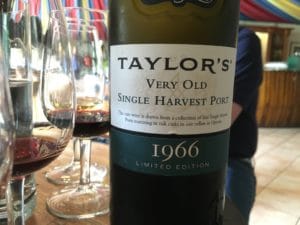 1966 Taylor Fladgate Very Old Single Harvest Port – This is essentially a Colheita style port, a Tawny that is 50 years old. A knockout, with mint, intense nuttiness, coffee, and quiet raisin and baking spice character. Despite the age, it has a sunny finish. Opulent yet easily drinkable. Best Port I tried on the entire trip. A+

Croft Pink – The original rose Port, made from 100% red grapes that spend 6 hours on the skins; it never sees wood. Notes of strawberries and some tea leaf lead to a simple and fruity wine. We reviewed this years ago; it was more recently reformulated to reduce the total sugar level.) B+

Croft 10 Years Old Tawny Port – A nose of mocha and baking spice lead to a significantly more fruit-focused body, with notes of fruit tea and a jammy finish. B+

Fonseca Siroco White Port – Quite dry and herbal, with some astringency and floral notes. B-

Fonseca Terra Prima – Sold as Terra Bella in the U.S. Fonseca’s organic Ruby Port is fresh with fruit, mint, and offers a long, sweet finish. Quite luscious. B+

Ramos Pinto White Port Reserva – Fresh, lightly sweet, with some lemon notes. A little vegetal on the finish. B

Ramos Pinto 10 Years Old Tawny Port – Classic tawny, with lots of nuts, leather, and some Madeirized fruit. Coffee and tea on the finish. B+

2005 Ramos Pinto Vintage Port – Dense with dark chocolate and heavy cassis. Long finish with considerable life left in it. B+ 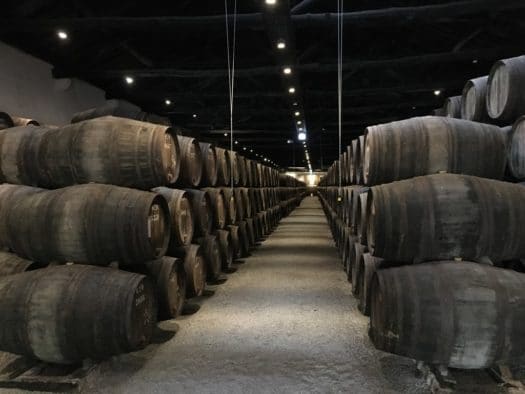