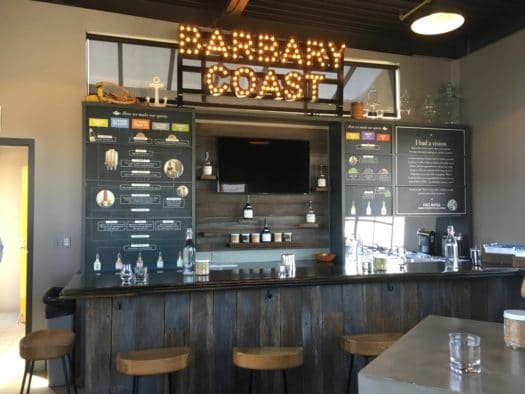 Anchor Brewing is icon of San Francisco, dating back to 1896. Of more recent advent is Anchor’s distilling arm, which got going only in 1993. A funny thing, though: Anchor Distilling is on pace next year to match Anchor Brewing on a revenue basis, the new kid done good in the end.

The brainchild of Fritz Maytag, Anchor Distilling got going in highly unusual fashion (its original goal was to produce 100% straight rye, which the company still makes today), and eventually it added on a number of gins and a hop-flavored vodka (its most recent addition).

Now, in a rooftop bungalow that was formerly Maytag’s one-bedroom apartment, Anchor has opened a tasting room where six of its distilled products, all produced on site, can be sampled. The tasting is seated and led by a professional (a local bartender in my group) who walks novices and pros through the ins and outs of tasting spirits and identifying the nuances among them.

The $35 experience runs on Thursdays and Fridays, and reservations are required. Check it out! (Photos from the brewery, the jam-packed distillery (not open to visitors), and the rooftop tasting room and gardens can all be found below.)