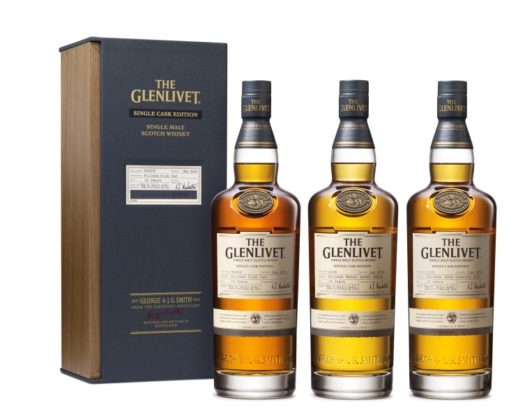 I scratched my head, too: Why would a major producer of Scotch whisky name a series of high-end releases after a train invented in the United States? We’ve got the full story, courtesy of The Glenlivet.

The Glenlivet has been a standard-setting luxury brand for nearly 200 years, appealing to whisky connoisseurs looking for a rare expression steeped in heritage and history. The brand’s historical ties to the Pullman Company, a pioneer of first-class railroad travel, are due in large part to the business savvy Captain Bill Smith Grant, Founder George Smith’s last distilling descendant. Grant was able to persuade the Pullman Company to offer 2-ounce miniatures of The Glenlivet as one of the only Scotch whiskies available in the dining cars helping to spread the whisky’s fame across the US.

To commemorate this piece of The Glenlivet’s history, The Glenlivet Single Cask Edition Pullman Train Collection are three new, special-edition Single Cask whiskies marking the first time ever the brand has released a Single Cask in this market and available exclusively in the US. The name of each bottle is inspired by the Pullman connection: Pullman Club Car, Pullman Twentieth Century Limited, and Pullman Water Level Route.

Founded on the three pillars of rarity, purity, and uniqueness, each Single Cask within the Pullman Train Collection is hand-selected by Master Distiller, Alan Winchester. Chosen for its exceptional quality and intense flavor, The Glenlivet Single Cask Edition has been transferred from cask to bottle purely, at their natural cask strength and without chill filtration, therefore locking in the original flavor and character from the cask’s influence. Only a few hundred bottles of whisky were drawn from each cask, making them a highly collectible and unique Single Malt series.

Though it might seem like a natural fit, these are not travel retail releases but will rather be released — obviously in very small amounts — to the general market in the U.S. only. As these are three single-cask releases, each expression is limited to just a few hundred bottles.

With that said, all aboard! Let’s try ’em!

The Glenlivet Single Cask Edition Pullman Water Level Route – “The original high-speed train” connected Chicago and New York. 14 years old, matured fully in an American oak hogshead. This is a solid example of bourbon-barrel matured single malt. Heavy on the nose with caramel and spice, florals burst forth with time in the glass. On the palate, a warm and lightly grainy attack gives way graciously to a mountain of dense chocolate, chewy nougat, and a touch of candied orange peel. The finish is lengthy and full of warmth, finishing with gentle notes of caramel and vanilla. Again, it’s a textbook example of how glorious unsherried single malt can be. 111.88 proof. 321 bottles produced. A  [BUY IT NOW FROM CASKERS]

The Glenlivet Single Cask Edition 20th Century Limited – The most famous train in the world at the time, this was the train that took the aforementioned Water Route from NYC to Chicago. This whisky is also 14 years old, but aged in a refill European oak butt that was previously used for another Scotch whisky. Bright on the nose with honey and nutmeg notes, with time it evolves aromas of camphor and mint. On the palate, the unctuous body offers notes of gingerbread, marzipan, and cloves. A light smattering of sherry-like citrus peel notes emerge primarily on the finish, rounding things out with a bit of zip. Not quite as lush as the Water Route, but an easy winner in its own right. 115.46 proof. 588 bottles produced. A-  [BUY IT NOW FROM CASKERS]

The Glenlivet Single Cask Edition Pullman Club Car – Finally we get to the Club Car, essentially the bar car, where Glenlivet would have been served on the train. This is an 18 year old whisky drawn from sherry butts. By far the darkest and richest whisky in this lineup, the nose offers notes of first-fill sherry, heavy with sherry and complemented by prominent baking spices, cocoa powder, and butterscotch. The palate plays up the above, adding ample notes of apricots, peaches, toasted marshmallow, and a creeping impression of barrel char. Again this is a fantastically well-structured whisky — all of these barrels were clearly chosen for a reason — that offers complexity and nuance alike. 112.48 proof. 618 bottles produced. A-  [BUY IT NOW FROM CASKERS] 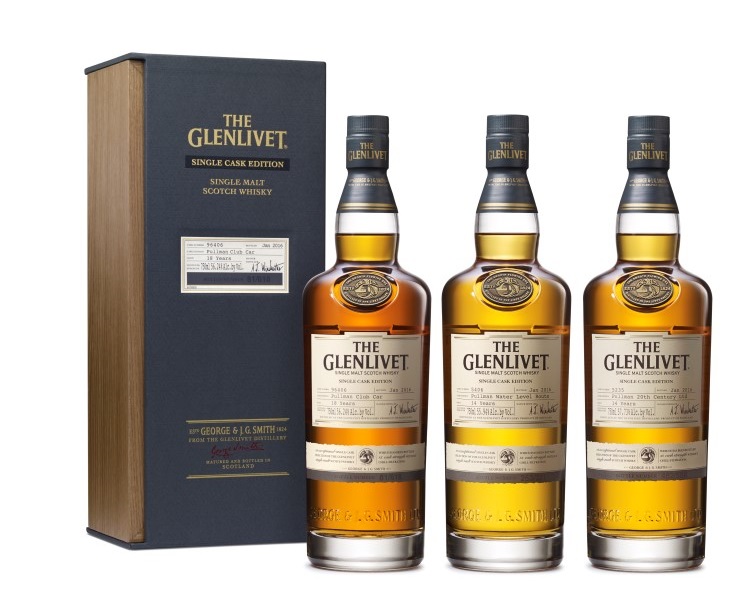