I have never asked for Midori. Midori has only sought me out, squirreled away in cocktails, usually the kind served blended into a slushie and handed out in a locale where the sunset is meant to be admired over anything else.

Midori is, surprisingly, owned by Japan’s Suntory and made exclusively in Japan from its 1978 launch until 1987; today it is made in Mexico. Midori is of course “the original melon liqueur,” though its color more closely resembles Homer Simpson’s nuclear material than any melon I’ve ever encountered. While designed to imbue a cocktail with a melon flavor, it’s main job really seems to be to carry the load of color. There are really just a handful of ways to make a cocktail green, and Midori is one of the cheapest and most accepted among them.

This is the first time I’ve ever tried Midori on its own (particularly at room temperature, as I do all my tastings), but let’s see what that experience is like nonetheless.

The nose… doesn’t smell like melons. The aroma is indistinct, with vague florals, evergreen, and a generally artificial, chemical character that wouldn’t be out of place in any cough syrup, green or no. The palate bears that out in spades — it has only the vaguest of connection to honeydew or any other melon, coming across as extremely sweet, but more vegetal than fruity, particularly on the lengthy and entirely artificial finish.

Of course, in cocktails, used in moderation, Midori can offer a somewhat different (and far better) experience, but I challenge you to detect any real “melon” flavor in a melon ball, a Japanese slipper, or a Midori sour… or this Guy Fieri nightmare.

All told, it is the nastiest stuff that I actually keep in my bar. 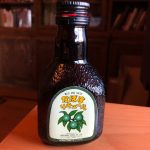