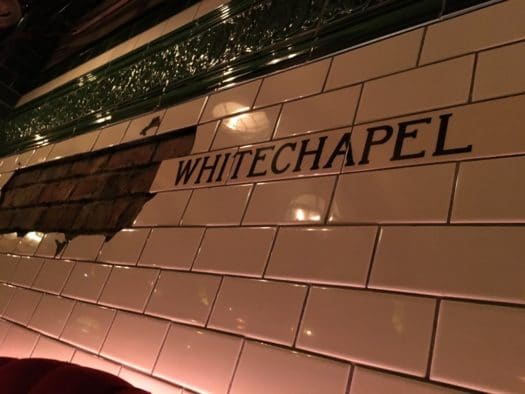 Of all the gin joints in San Francisco, well, you probably walked into this one, the only temple to this classic white spirit in town — in fact, the only one I’ve ever been to at anywhere.

Whitechapel opened in October 2015, part of the resurgence of classy, artisanal, and/or themed cocktail bars sweeping the nation, and particularly the Bay Area.

Whitechapel was dreamed up by Alex Smith, formerly of ThirstyBear, who after years of shopping the idea got Smuggler’s Cove proprietor Martin Cate to come aboard as a partner. The new establishment is a few blocks away from Smuggler’s, located in SF’s otherwise dead-at-night Civic Center district. (The good news: There’s plenty of parking available here.)

Inside, Whitechapel has been painstakingly designed to resemble a “steampunk Victorian era tube station,” though one imagines they were not drinking fancy gin cocktails in the London Underground in the late 1800s. Someone spent a lot of money here to make a really new place look really old.

But the cocktails here, oh my! Yes, they are all built around gin of some form (either straight, barrel-aged, or genever, or a combination of the three), and the dense cocktail menu stretches back to the 1800s. Some absolute classics (from Pink Gin — gin and bitters, served room temperature) are represented, but most drinkers head to the more updated concoctions which are presented at the front of the book and on “cheat sheet” one-pagers handed to every guest.

It’s one of these recipes that has quickly risen to become one of my favorite cocktails ever — it’s also a Whitechapel top-seller — the Narc Angel, a mix of Ford’s gin, orange curacao, maraschino, ginger, mint, and lemon. It’s great like that, but the genius is that it is served with a pipette filled with Campari. You squeeze as little or as much into the drink as you like, and as you drink. It starts off with gorgeous sweet-and-herbal notes in balance, then layers in that bitter edge as you guzzle it down — which is embarrassingly easy to do.

I also tasted the Lamplighter’s Story, a powerful blend of Plymouth Gin, hibiscus, grapefruit marmalade, serrano chili, and bitter orange soda, but felt the floral element was oddly overpowering. The frothy Holmes’ Bonfire is a frothy almond- and licorice-flavored concoction that looks (and tastes) a bit mad scientistish. And there’s the Penny Dreadful, a spirit-heavy drink made with various gins and vermouths, plus bitters and “smoked Islay peat.” The overall effect is a lot like a Manhattan — only made with gin instead of whiskey.

Whitechapel also serves food, with tastes running heavily to the origins of gin, the Netherlands and Britain — with a nod to Bangladesh, whose people now dominate the Whitechapel neighborhood in London. The poffertjes (buckwheat doughnut holes) are a sweet companion to a stout drink, but it’s the $120, 36-ounce tomahawk steak that really turns heads. Built to share, of course, Smith says they are regularly purchased and that the record is sales of eight or nine of the monsters on a single night.

Think gin is just for tonic and martinis? Think again by visiting Whitechapel. 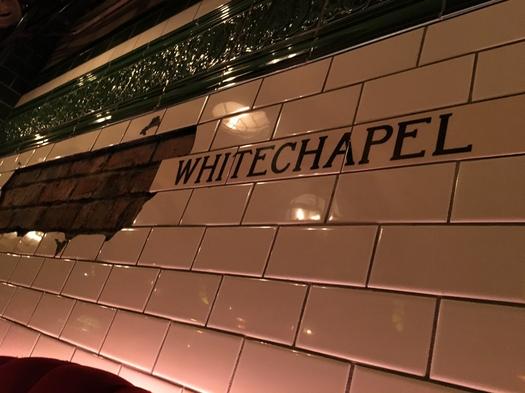