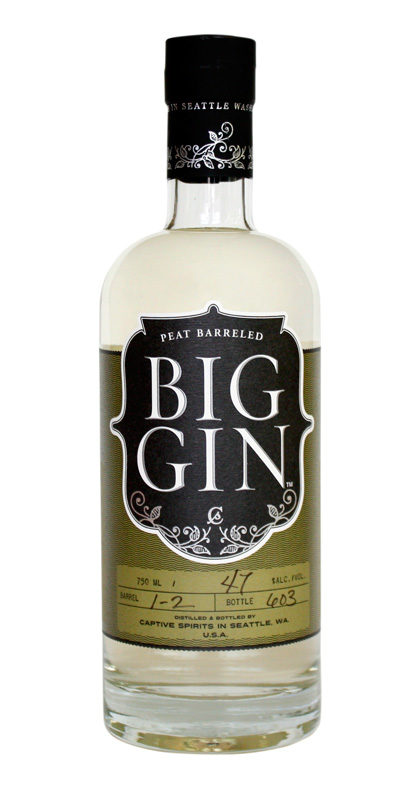 Seattle-based Captive Spirits makes one thing and one thing only: gin, and lots of it. The company recently expanded its Big Gin line from two to a total of four expressions. The line now includes one standard bottling and three barrel aged versions. Just added, a “peat barreled” version, which is rested in peated whiskey casks, and a barrel reserve bottling, which spends three years in cask and is bottled at higher proof.

Today we look at both of these aged expressions. Note that Big Gin uses the same botanical bill for all its gins; only the barrel treatment differs. The standard collection: juniper, coriander, bitter orange peel, grains of paradise, angelica, cassia, orris, cardamom, and Tasmanian pepperberry.

Big Gin Peat Barreled – With this new expression, the straight expression of Big Gin is rested for four months in Westland Distillery’s Peated Single Malt barrels. Before their time at Westland, these barrels held Wild Turkey bourbon, making this round #3 for the casks. The peat is understated but present here, showing the nose notes of light smoke, some menthol, and ginger. The palate is more familiar and in line with traditional, unaged gins, showcasing juniper, coriander, cracked black pepper, and a smattering of earthy spices, though any citrus notes present in the original gin are dulled by the cask treatment — I don’t really get any of that orange peel here at all. The finish finds some caramel and vanilla notes lingering, the strongest hint of the whiskey barrel coming through. All told, this is a hearty gin that offers a rather classic construction with just the right amount of spin on it (plus a touch of color). I wouldn’t have thought peat and gin would make for compelling companions, but Big Gin Peat Barreled proves me distinctly wrong. 94 proof. Reviewed: Barrel #3-5. A- / $35 [BUY IT NOW FROM DRIZLY]

Big Gin Barrel Reserve – This is the same gin as Big Gin’s Bourbon Barreled Gin (which we haven’t reviewed), except it is aged for three years instead of just six months in once-used Heaven Hill bourbon casks. It is also bottled at higher proof — 103.5 instead of 94. This is an exotic and compelling gin that merits (and requires) some serious thought. On the nose, heavy whiskey notes prevail — vanilla and cloves, plus some barrel char — while notes of juniper and mint take a secondary role. The combination is immediately both mysterious and engaging and drives you into an even more enigmatic body. Here a rush of alcohol gets things started, then a cascade of flavors hit the palate. First fruit and chocolate notes, then a hit of evergreen (cedar, perhaps), more mint/menthol, and black pepper. The chocolate makes a return appearance on the finish, which takes on an engaging and unusual cinnamon-studded Mexican chocolate character. Combined with the higher alcohol level, it makes for a warming and sweet conclusion to an experience that is on point from start to finish. Some may call this a gin for whiskey fans, and they wouldn’t be wrong. I, for one, don’t see a problem there. 103.5 proof. Reviewed: Barrel #01. A / $37 [BUY IT NOW FROM DRIZLY] 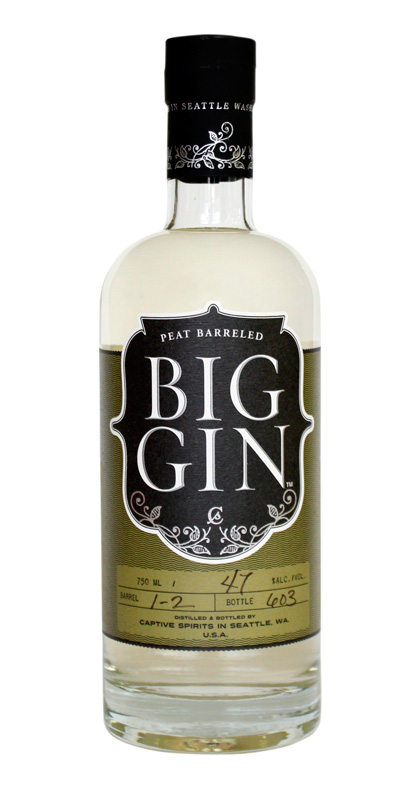