Beer Rated A Rated A- Rated B- Rated B+ Reviews 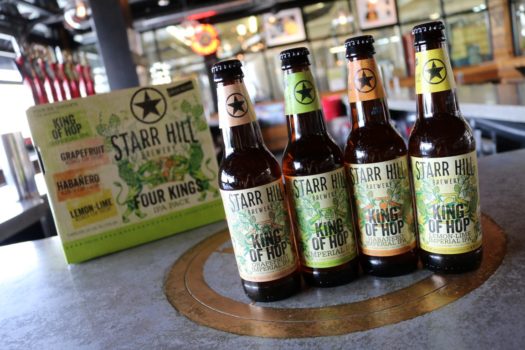 A  whopping seven new releases from Starr Hill, including a series of four IPAs which are variations on the theme, bottled under the “King of Hop” moniker.

Starr Hill King of Hop Imperial IPA 2016 – The base IPA, dry hopped with a variety of American hops and pumped up to the full, west-coast effect. Ample citrus notes find a pleasant companion in a healthy slug of piney hops, with a light mushroom character underpinning it. A classic IPA from start to finish, it’s a refreshing exemplar of the style. 7.5% abv. A

Starr Hill King of Hop Lemon-Lime Imperial IPA – The lemon/lime notes are understated, just a quick rush of lemon flavor on first sip, then ample hops following, providing the standard piney, earthy, slightly citrusy notes present in the unflavored version. Together the lemon/lime and hops components make for a pretty and refreshing finish — but then again when did a squeeze of lime not make for a natural companion to beer? 7.5% abv. A-

Starr Hill King of Hop Grapefruit Imperial IPA – You can’t escape grapefruit in beer these days, but in Starr Hill’s grapefruitized IPA you won’t even notice it. Virtually indistinguishable from the unflavored version, maybe it’s like having vitamins in your beer. “Fortified” with grapefruit? I taste nothing different here at all, but nonetheless I’m giving it a half a grade off for being ineffectively flavored… and for the threat of the vitamins. 7.5% abv. A-

Starr Hill King of Hop Habanero Imperial IPA – Exactly what you’re expecting, a hop-heavy IPA with the thrill of heat hitting hard on the finish. The first sip is off-putting. From there you get used to the spicy finish fairly quickly. On its own it’s a bit disjointed, but as a strange mirror to the standard grade King of Hop, it’s worth a peek, particularly if you’re into the spicy stuff. 7.5% abv. B+

Starr Hill The Hook Grapefruit Session IPA – Yes, more grapefruit! And here you can taste it a bit more clearly, the strong upfront hops giving way to a burst our sweet-and-sour citrus, before finishing on a lightly earthy, leathery note. Quite a nice flow, and well balanced. 4.9% abv. A-

Starr Hill Daily Grind Peppercorn Farmhouse Ale – I hear “daily grind” and immediately think coffee, but this is a spicy, peppercorn-based beer that folds in bold citrus notes, plus apple cider, sticky toffee, and ample malt. (That said, I get almost nothing in the way of pepper within.) There’s something to like in this beer but it’s a bit all over the map — and the heavy residual sweetness on the finish fatigues the palate. 6.2% abv. B-

Starr Hill Sublime Citrus Wit – A bold wheat brew, loaded with malty cereal notes plus ample citrus peel, grapefruit peel, and a touch of nutmeg. Refreshing, and with just a touch more going on than your typical wit bier. 4.7% abv. B+

each about $9 per six-pack / starrhill.com