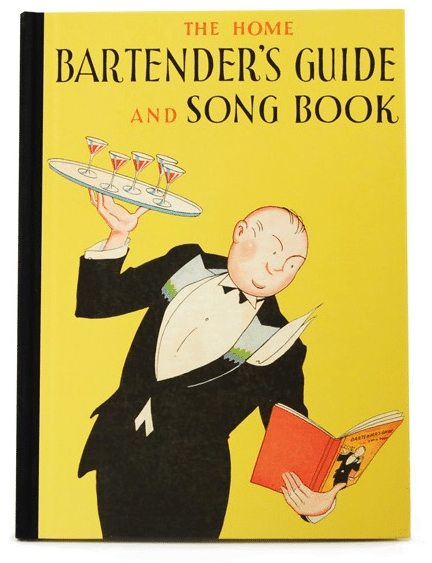 Old timey cocktails are back, and so are old timey cocktail books. While cheap paperback reprints have been rampant in recent years, now these out of print tomes (originals can run up to $700 on Amazon) are being remade with fancy hardcovers and all the original detailing intact.

Here’s a look at three, all recently republished by Cocktail Kingdom.

Originally published in 1930 (in the thick of Prohibition, it should be noted), The Home Bartender’s Guide and Song Book is a true classic of the home bar, one which melds cocktail recipes with, yes, drinking songs. As a look back in time, it’s fun to marvel at both the archaic recipes (martinis are made with bitters!) and the impressive drinking shanties, which presumably you were meant to sing when at a cocktail party:

What tune you were supposed to sing these songs to is not revealed, but it probably doesn’t matter when you’ve had a Shameless Hussy, White Satin Cocktail, or Shaluta! cocktail or three. (To make a Shaluta!: One part “Dago Red,” one part gin, one part lemon juice, “handle any way you like.”) Mmmm.

It’s doubtful anyone will actually make cocktails using this book, but it’s a fun trip to the past nonetheless, complete with period typefaces, line drawings, and, of course, ample — yet subtle — racism. B+ / $28 [BUY IT NOW FROM AMAZON]

Louis’ Mixed Drinks, originally published in 1906, was ahead of its time in offering recipes for bottled cocktails (pre-mix and keep ’em on hand!). Other cocktails included are era-appropriate, including 12-layer Pousse Cafes and plenty of fizzes, flips, and cobblers. Author Louis Muckensturm also was a bit of a wine fan, and if you need overviews of vintages from 1880 to 1905, he’s got you covered. This book is a bit less enchanting than The Home Bartender’s Guide (and harder to read owing to the elongated, narrow format) but, as with all of these tomes, a fun glance backwards at, you know, simpler times. B / $28

American Bar, from 1904,  is entirely in French, so you’ll need to bring your translator to bear on this one. No rating / $28