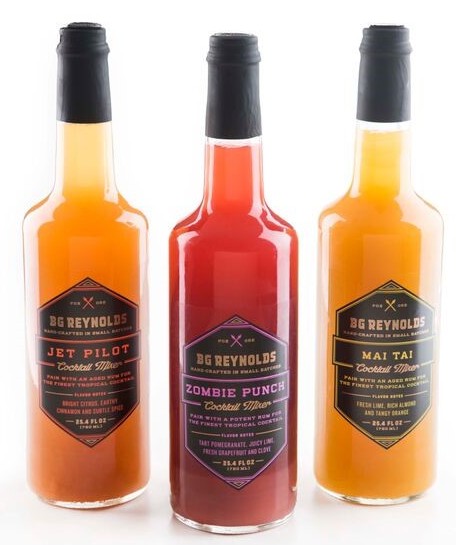 Tiki drinks are some of the most iconic cocktails anywhere, but they’re so complicated to make that few people bother at home. The typical Mai Tai has five or six ingredients. The Zombie: More than 10. I never make these drinks myself, and it’s my job.

So, how about a shortcut, courtesy of syrup-maker BG Reynolds? BG is expanding its repertoire from simpler syrups into more complex but (almost) alcohol-free tiki mixers — just add rum ad you’re ready to go.

Each is made in small batches from natural ingredients (which you’ll note during the considerable amount of settling each undergoes after a few days of sitting idle). Shelf stable at purchase, the 750ml bottles can be refrigerated for up to 90 days after opening.

BG Reynolds Mai Tai Cocktail Mixer – A mix of sugar, orange juice, lime juice, almonds, and various flavorings. Straight up, it showcases lime-heavy citrus and lots of gooey almond/marzipan notes, which together give it an interesting banana kick. Fortunately, the orange juice (not a Mai Tai ingredient, though orange liqueur is) doesn’t overwhelm the beverage. The addition of rum (I used Cruzan Single Barrel) tends to dominate the mix, so dial it back and shake well, which lets the vanilla in the rum shine alongside the almond sweetness. While the color is a bit too mustardy (due to the OJ) vs. the typically brown shade of the usual Mai Tai, the drink is full of flavor and tastes surprisingly authentic, making this a huge winner that works well. A- / $16

BG Reynolds Zombie Punch Cocktail Mixer – A mix of sugar, grapefruit juice, lime juice, pomegranate juice, Angostura bitters, overproof rum, and spices/flavorings. (The mixer is still under 0.5% alcohol, despite the inclusion of rum in the mix.) On the palate, cloves completely dominate — which is odd, because the traditional Zombie does not have cloves in the recipe. They’re so prominent it’s hard to taste much of anything else, but some vague citrus later on at least recalls grapefruit. Mixing with overproof rum as specified (I used Cruzan Clipper 120) turns this into a Christmas monstrosity, overflowing with cloves and gingerbread and the pungent petrol that overproof rum usually brings. I’m not sure what this is, but it’s not a Zombie that I recognize, nor anything that I could imagine drinking a full glass of. C- / $16

BG Reynolds Jet Pilot Cocktail Mixer – A mix of grapefruit juice, sugar, lime juice, Angostura bitters, overproof rum, and spices/flavorings. The functional flavor here is allspice — a cinnamon/clove mix that is pungent but is immediately more approachable than the Zombie mix. Standard, not overproof, rum is specified as the mixer here (I used the Cruzan Single Barrel again), and its addition brings the cocktail to a more satisfying balance. The cinnamon still dominates, but the tart citrus gives it some backbone. That said, the herbal aftertaste is enduring and a bit much, after a while. B / $16

Review: Bittermilk Mixers No. 5 and 6
Posted in Mixers/Non-Alcoholic, Rated A-, Rated B, Rated C-, Reviews