Rated A- Rated B Rated B+ Reviews Travel Wine 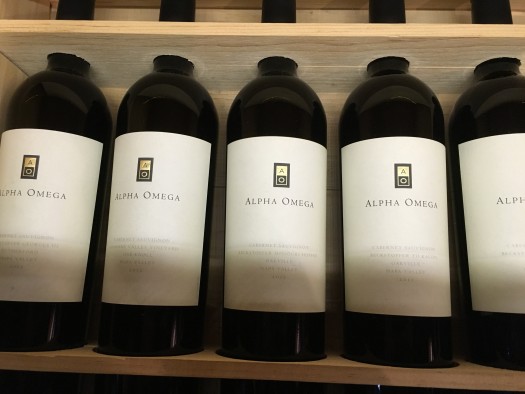 I’ve been a fan of Alpha Omega — especially its white wines — for years (the entire operation isn’t quite 10 years old), and have always wondered why I never see these wines at stores or on wine lists. Mystery resolved: During a recent visit to this hot winery, our host informed us that 90 percent of the winery’s production goes direct to consumers, either through the tasting room or the wine club.

During our visit, we tasted through a range of Alpha Omega’s current releases. Thoughts follow.

2014 Alpha Omega Chardonnay Unoaked 2013 – Unoaked, gentle and elegant. Fresh apples and a touch of citrus make this easy to drink. A- / $44

2013 Alpha Omega Chardonnay – The oaked version of the above (30% new oak, with light/medium toast), born from the Newton pedigree of AO’s winemaker. A touch of mint works nicely with the vanilla here, but the overall impact is one of restraint, with surprising acidity on the finish. A- / $72

2013 Alpha Omega Petit Verdot & Cab Franc – Curious name but see if you can guess what’s in this one? (52% petit verdot, 48% cabernet franc.) Starts off a bit shut down, but it slowly opens to reveal gentle strawberry and black tea notes. Exotic but enchanting. A- / $98