The name is a reference to the first golf ball (golfing being sacred in Scotland), which were made of leather and stuffed with bird feathers. That doesn’t have a lot to do with what’s in the bottle as far as I can tell — The Feathery is a collection of Highland malts, all first-fill sherry cask matured. It’s got as much to do with feathers as it does with octopi.

Let’s try it all the same.

The nose is much bigger than I expected, with intense notes of walnut, almond, leather oil, and dark caramel. A touch of salt air is a nod toward this whisky’s Highland origins.

The body backs up the nose fairly closely, its heavily nutty character the most prominent element. Brooding sherry notes back up the core, offering a natural companion to all those almonds and walnuts. Notes of chocolate, burnt caramel, vanilla, and a bit of candied ginger add nuance and interesting counterpoints to the nutty core. The finish is modest, fading before it has outstayed its welcome.

All told, this is one of the best blended malts I’ve encountered all year, and any fan of malt whisky will do himself a service by tracking down a bottle. 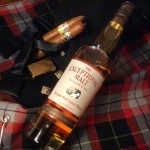