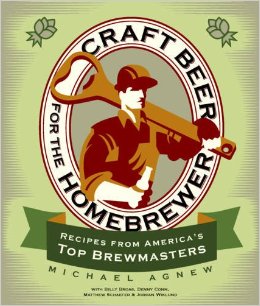 Homebrew beer cookbooks are legion, but this title from Michael Agnew is special — it’s stuffed with recipes for (real) craft beers, many of which from brand names you’ve probably actually tried. Lagunitas, Allagash, Rogue, Shmaltz — all of them are well represented among the roughly three dozen recipes in the paperback.

Each recipe spends two pages describing the beer then walking you through its construction, step by step, with precise measurements in both English and metric units. The book is sorted into chapters by style, though some beer types — pale ales and Belgians, namely — are over-represented next to less included lagers, rye, and wheat beers.

No matter. Take a flip through the book and see if there’s something you like in the table of contents. If nothing else, it’s worth the price of admission alone for the specifics on how to make Lagunitas Little Sumpin’ Sumpin’ at home!

Craft Beer for the Homebrewer