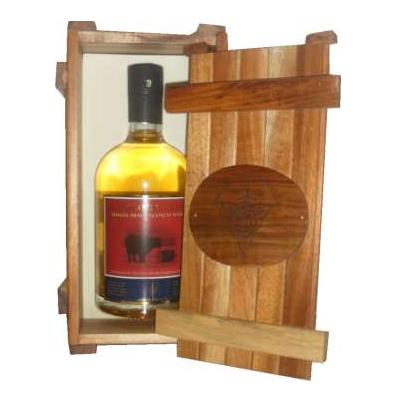 Abhainn Dearg (pronounded: Aveen Jarræk) is located on the Isle of Lewis in the Outer Hebrides. It’s the only distillery located out here, and the malt whisky it produces is young and pungent. A brand new operation, the first whisky (new make) was released in 2010. Reviewed here is a limited release of a 2011 single malt, bottled after just three years and now quite difficult to find (and quite expensive).

The nose features moderate smoke, heavily charred grains, and some hospital character — all hallmarks of young malt. On the palate, there’s plenty of youth, with ample astringency, Band-Aid notes, simplistic smoke elements (no underlying sweetness or unusual overtones), and a short finish that resonates with notes of furniture oil. On the whole, there’s just not much going on here yet — not enough to warrant much more than a passing glance, anyway.

As an example of a work in progress, it’s a mildly interesting experiment, but on its own it doesn’t have the interest or excitement, say, of an early Kilchoman release.