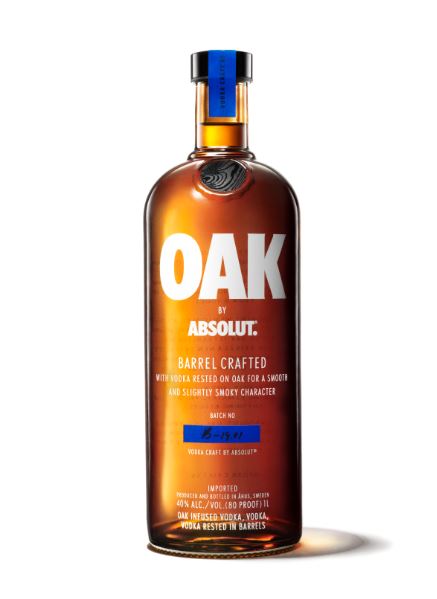 To quote Tom Cruise in Risky Business, sometimes you gotta say, What the fuck?

How big is whiskey? So big that the vodka guys are trying to muscle in on the business.

Oak by Absolut is Absolut vodka rested in oak barrels. Or, more accurately, it is “oak infused vodka, vodka, [and] vodka rested in barrels,” per the label. What any of that means I don’t really know. The mechanics of the oak infusion aren’t disclosed, nor is any information about the type of barrels or the length of time the vodka spends in them. Was the vodka rested at distillation proof or at Absolut’s standard 80 proof? I just don’t know.

The end product looks and tastes exactly as you think it will. As dark as any whiskey (well, almost any whiskey), it certainly looks the part. On the nose it’s tough to parse — notes of vanilla are at the forefront, then cinnamon, raspberry, root beer soda, and marshmallows. It doesn’t really smell like whiskey… but it doesn’t smell like anything else either. A very young brandy? Some kind of flavored Irish whiskey? It’s a chameleon.

The palate pushes on with abandon — sweet vanilla custard, a modest lashing of lumber, and some cherry notes hit first. The main event is a distinct A&W Root Beer character — not a dense amaro bitterness, but a highly sweetened version of the stuff that leaves a hint of rootiness behind for the finish. Here things slowly fade away, offering some notes of prune juice and brown sugar amidst the lingering root beer character.

What’s surprising about Oak by Absolut — besides the fact that it exists at all — is how harmless it is. Those expecting a rank lumber bomb — which often happens if you put rack vodka in a wood barrel — won’t find it here. Whatever Absolut has done to doctor this oddity — and that must be significant — it’s been able to avoid turning it into the disgusting monster you were expecting it to be. At the same time, there’s really no reason, absolutely no reason at all, for it to exist. No whiskey fan in their right mind would pick this even over a $12 bottle of bourbon, and no vodka drinker would ever set foot near it. So why does this exist? As a gateway to whiskey (which Absolut doesn’t make)? Someone lost a bet? You got me.